Weekend TV guide: eight of the best shows to watch

Colin Farrell talks Dumbo on the Late Late, Dancing with the Stars comes to a climax and Blue Plant Live returns 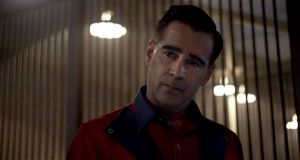 The Late Late Show
Friday, RTÉ One, 9.35pm
Actor Colin Farrell, who who will soon be appearing in Tim Burton’s new re-imagined version of Dumbo, talks about what fans can expect from live-action remake of the classic Disney animation movie. Farrell, an ambassador for Special Olympics Ireland, will be joined by some of the medal holders to celebrate their achievements at the World Games in Abu Dhabi.

It’s horses for courses as trainer Ted Walsh, double winning jockey Rachael Blackmore and Gold Cup champion Paul Townend to take a look back at another successful Cheltenham festival for the Iirsh.

Sunday sees the climax of this year’s Dancing with the Stars and celebrity hoofers Cliona Hagan and Mairead Ronan are looking to become the first woman to win in three seasons of the show. Fellow finalist Johnny “Bad Boy” Ward, who’s also on the Tubridy couch, might have something to say about that.

Jessica Bowes was left with long term physical and psychological damage after a vicious assault by the father of her children left every bone in her face broken. She details why she waived her anonymity to speak out against domestic violence laws.

Music will be from Aslan and Screaming Orphans.

Can I Improve My Memory?
Friday, Channel 4, 8pm
Spare a thought for the brave celebrities who have volunteered for this show, which gives them just two weeks to master a subject they know nothing about. Fashion presenter Gok Wan will be quizzed about the periodic table, veteran broadcaster Valerie Singleton is tested on UK grime artists, and reality star Joey Essex must learn all about William the Conqueror. Michael Buerk will be asking the questions, and world memory grandmaster Mark Channon is on hand to teach them the techniques that will (hopefully) help them retain the information.

Celebrity Juice
Friday, Virgin Two, 10.30pm
Keith Lemon is back to present a new 21st series of his near-the-knuckle comedy quiz. Joining the risque host is new team captain Paddy McGuinness ( no stranger to Lemon’s digs having starred with him in The Keith and Paddy Picture Show). Holly Willoughby is also back as the other skipper, while guests include two stars of this year’s I’m a Celebrity: actor and singer John Barrowman and The Inbetweeners’ Emily Atack.

Pointless: The Good, the Bad & the Bloopers
Saturday, BBC1, 6.10pm
It’s been a decade since Alexander Armstrong and Richard Osman first presented an episode of the much-loved quiz. Although the Beeb’s powers-that-be were probably hoping it would prove to be a hit with viewers, few could have imagined it would become a TV phenomenon. The duo return tonight with a special edition to mark the show’s 10th anniversary, featuring outtakes and unforgettable moments. Among the highlights are classic nonsensical answers, exciting big wins, and a glimpse behind the curtain at parts of the show never seen before.

All Round to Mrs Brown’s
Saturday, RTE One, 9.15pm
The spin-off series from Mrs Brown’s Boys is back for a third run, and you know the drill by now: Agnes’s daughter Cathy is hosting her own TV chat show at the Brown household, and invited several celebrity guests around, but she keeps getting chat-show-bombed by Agnes, who can’t help sticking her big size-12 slippers into the proceedings. Hilarity ensues. The first episode will see Desperate Housewives star Teri Hatcher coming face to face with Ireland’s original desperate housewife. Other guests include comedian Rob Beckett, sports presenter Chris Kamara and British actor Anna Friel, with music from Calum Scott and Naughty Boy.

The Ray D’Arcy Show
Saturday, RTÉ One, 10.20pm
Comedian PJ Gallagher will reveal what his new show,  The Big DIY Challenge, is all about. He’ll also talk about taking up his role again in The Young Offenders and why volunteering with the RNLI has changed his life for the better.

Disability rights campaigner Joanne O’Riordan talks  about her transition from student life to working as a sports journalist and the launch of her  new podcast.

Stephen Travers, one of the Miami Showband massacre survivors, will be in the studio to talk about the new Netflix documentary which charts his quest for the truth about the attack and his search for reconciliation.

Anne Hegerty, “The Governess” from  quiz show The Chase, will discuss her late Asperger’s diagnosis, her Irish connections and what life was really like in the jungle during last year’s I’m a Celebrity.

Music will be in the form of a unique duet from Camille O’Sullivan and Aidan Gillen who perform Roy Orbison’s In Dreams in aid of Focus Ireland and they chat about their upcoming gig Rock for Homelessness concert.

Dancing With the Stars: The Final
RTÉ One, 6.35pm
Celebrities Cliona Hagan, Mairead Ronan and Johnny Ward are vying to take home the coveted Glitterball Trophy (presuming that Jake Carter handed it back after his win last year). Hagan and Ward have been standout performers this year, but dark horse Ronan will fancy her chances. They will each perform two routines – a personal favourite and one chosen by the judges – to impress the viewers into choosing them as this year’s champion. Jennifer Zamparelli and Nicky Byrne will be on hand to wipe away any blood, sweat or tears, of which there are sure to be many. Special guests are Westlife, their first appearance on Irish television since reforming.

Blue Planet Live
Sunday, BBC1, 8pm
Chris Packham, Steve Backshall and Liz Bonnin present a week of live programmes examining aquatic wildlife around the globe and the current state of the world’s oceans as animals struggle to thrive in the face of increasing environmental pressure. Packham visits the world’s biggest whale nursery in Mexico, Blackshall goes swimming with tiger sharks in the Bahamas, and Bonnin meets scientists performing experiments on coral to help preserve the Great Barrier Reef, while also encountering new-born turtles living on a nearby island. – Contributing: PA