Minister for Health Simon Harris, for the "Yes" side, and Sinn Féin TD Peadar Tóibín, representing the "No" vote, clash during RTÉ's Prime Time debate on the abortion referendum. Video: RTÉ 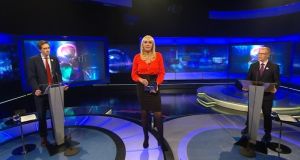 “We’re standing here with the luxury of being two men who will never experience a crisis pregnancy,” Health minister Simon Harris told his opponent, Sinn Féin TD Peadar Tóibín, in the final RTÉ debate before the referendum, “and you’re ignoring the reality facing those women.”

It was hard to say what was most impressive about this moment, coming midway through Prime Time, which aired on RTÉ One on Tuesday, at 9.30pm.

The urgent precision of Harris’s words, the expression of genuine concern that accompanied them, or that he somehow managed to deliver them while the debate’s no-nonsense moderator Miriam O’Callaghan was moving on to other matters.

As most people watching knew by now, it wasn’t supposed to be this way. A few short hours before the live broadcast, the Love Both spokesperson Cora Sherlock pulled out of the debate, and if there was a reason for her departure viewers were not made aware of it.

Instead “for reasons of balance” O’Callaghan explained, the debate reduced its participants in number from four to two, placing the scheduled panellist and consultant obstetrician Professor Mary Higgins in the audience, while leaving two men at the podiums to argue over the reproductive rights of women. The patriarchy may be truly beyond parody.

The debate, however, was a relatively calm affair, where a broadcaster - already chastened because of a poorly moderated shouting match on the previous week’s Claire Byrne Live debate - worked hard to maintain balance, respect and audibility among the speakers.

For this “very divisive issue” it counted as another exchange between those entirely convinced of their positions, delivered ostensibly for the benefit of between 14 per cent and 17 per cent of the electorate who are undecided.

From the audience, composed mainly of medical and legal professionals as well as those with personal stories of abortion, Mary Higgins raised the issue of health care for women in Ireland, currently curtailed by the Eighth Amendment. Because of it, pregnant mothers with fatal foetal abnormalities are “planning a birth as well as a funeral”, she said, without adequate or compassionate support from their health service.

Higgins spoke of Savita Halappanavar, denied an abortion that might have saved her life in 2012, who died from a septic miscarriage.

By way of counterpoint, a general obstetrician in the audience, Trevor Hayes, spoke of his own competency under such dire circumstances: “I will remove that baby to save that woman,” he said. “I can evaluate the danger. I do not have to wait until the patient is at the cliff’s face. I can move early.” Not according to the constitution he can’t. Was he happy with the eighth amendment? “I’m quite happy that it protects me,” he said.

To attempt to summarise a circuitous debate, Harris said that abortion is a reality in Ireland, with nine people travelling abroad each day to access abortion and three people taking abortion pills.

“Why are these women in crisis situations not being protected?” Tóibín, breaking again with his party on the matter, spoke of the right to life of the unborn, calling the government’s proposals for unrestricted access up to 12 weeks “breathtakingly extreme” while imagining a situation of “abortion on demand” brought in “by saying you’re going to focus on those difficult cases.”

The No side dislikes “hard cases” – such as that of Halappanavar, whose grieving family support the Yes vote, the X Case, the C case or, more recently, the P case – used to argue against the Eighth Amendment. The Yes side dislikes phrases such as “abortion on demand”, which it says trivialises the gravity of both the requirement for and process of terminating a pregnancy.

Tóibín was composed and unswerving in his distaste towards abortion in all circumstances, including rape (“I don’t believe that the solution to one injustice is another injustice”) but he often struggled onstage, becoming lost in papers or trailing off. So the debate often seemed to be between Harris and O’Callaghan, who interjected frequently, presumably for the sake of balance, as though neither opponent had turned up for the debate.

That so much discussion was devoted to British abortion law, particularly the reported figure that 97 per cent of abortions are carried out in the UK on mental health grounds, was not lost on the Yes side. “At the moment we have an English solution to an Irish problem,” the psychiatrist Veronica O’Keane pointed out, arguing cogently that mental health is not a soft issue.

Harris seized on that point too: “David, the only people talking about the British system in relation to the Irish proposed law are the people who are satisfied for women to have to continue to travel to Britain to access healthcare.”

From the audience, former senator Fidelma Healy Eames mooted yet another amendment instead of repeal, “to address the very sad and difficult cases of rape and life-limiting conditions”.

Would she support such an amendment, asked David McCullagh. “Well, certainly I do think that needs to be addressed,”she fudged.

“Would you vote for it?” McCullagh persisted. “I would certainly look at it very seriously,” she said, swaying her head.

“That’s not a yes, is it?” said McCullagh. Healy Eames smiled and prayed for the camera to move away – perhaps to England.

To conclude, Tóibín appealed to our sense of equality:

“There’s not two classes of people, we are all one and we are all equal and we need to stand up for each other in every single circumstance.”

Harris didn’t pause. “We’re all one in Ireland until you’re a pregnant woman,” he said. “And then it’s a very lonely place. Because pregnant women in this country do not have the same protections they have in other countries… This is a once in a generation opportunity. Let’s not squander it.”