Could happen to a bishop: Excruciating seconds of dead air 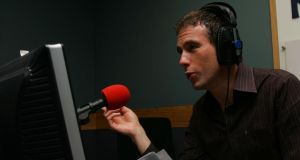 In the run-up to the arrival of Pope Francis, the logistics of his visit dominate the airwaves. Whether the topic is traffic restrictions, accessibility issues for mass-goers or the cost of stewarding the crowds due to attend the papal events, it all serves as a reminder that for all the scandals that have assailed the Catholic Church, the Pope remains a pretty big deal.

Lest there be any doubt about how much things have changed in Ireland since Pope John Paul II’s triumphant visit in 1979, however, it is definitively dispelled by the encounter on Tuesday’s Morning Ireland (RTÉ Radio 1, weekdays) between presenter Gavin Jennings and Bishop Alan McGuckian of Raphoe. Speaking after the pope’s letter condemning clerical child sexual abuse, the conversation starts awkwardly and goes downhill from there.

While Jennings’s brusquely clipped style doesn’t naturally set guests at ease, Bishop McGuckian has all the carefree demeanour of a prisoner in a Stasi interrogation cell. A soft first question about opening-day events of the World Meeting of Families is met with a nervous pause and a hesitant response. When Jennings then asks if any bishops criticised for not protecting children are taking part in the events, the bishop comes completely unstuck. He falls silent, mutters that he doesn’t know and goes quiet again before apologising for his lack of information. It’s car-crash stuff, the excruciating seconds of dead air seeming more like hours.

When Bishop McGuckian refer to a ‘learning process’ for both church and state, it’s a quietly delivered but still breathtaking bit of whataboutery

Bishop McGuckian rallies somewhat when the conversation turns to the papal letter on abuse, as he welcomes the pope’s apology. When Jennings asks if the Vatican will actually change its laws on the issue, the bishop responds that while “there have not been many cases of the church moving against people in positions of influence, the same is true in civil society”.

He describes it a “learning process” for both church and state. It’s a quietly delivered but still breathtaking bit of whataboutery. Jennings helpfully points out that while it’s a crime in Irish law not to report a child at risk, the Vatican still withholds files in many clerical abuse cases. For good measure, the presenter finishes by asking how many bishops here have been reported to the gardaí for concealing abuse. “I have no idea,” comes the forlorn response.

It’s a short interview, but one which succinctly sums up how utterly different the atmosphere is now from 39 years ago. If it was unlikely that a journalist would adopt such a confrontational manner with a member of the hierarchy back then, a bishop being so stumblingly defensive in tone was unimaginable. That the church’s actions in relation to historic abuse haven’t been as contrite or humble as its words is another matter.

The near absolute power once wielded by the church in Ireland is vividly illustrated in the Documentary on One: In Shame, Love, In Shame (RTÉ Radio 1, Saturday). Narrated and produced by Conor Keane, the documentary recounts the extraordinary events that followed the death of a young woman in Co Kerry in 1946, with consequences that continue to the present day.

Peggy McCarthy was a young single woman when she became pregnant. The father promptly left for England, leaving Peggy with her parents in impoverished rural Ireland.

Giving birth at home, Peggy was hit by complications and was taken by a local jarvey driver named John Guerin to nearby Listowel hospital. There, Peggy was refused care by the supervising nun, on the grounds that she was unmarried and pregnant. Guerin then took her to the hospital in Tralee, where she was again denied admittance. Somewhere on the way to Killarney, Peggy died during childbirth.

“It’s difficult to make sense of it all today, refusing to hospitalise a seriously ill woman solely because the child about to be born was conceived out of wedlock,” says Keane, “but that’s precisely what happened to Peggy.” One suspects such incidents were common enough then: Keane spreads the blame widely, not just on church dogma but also state complicity.

But things got worse. The parish priest, Canon Patrick Brennan, barred Peggy’s coffin from church grounds. This action, “tantamount to locking the gates of heaven”, was too much for John Guerin, who had brought Peggy’s body from Killarney. He and a group of friends broke down the church gates in outrage. “They were up in arms,” says John’s son Tony Guerin, who later wrote a play about the incident. “They were back to pagan Ireland; this was one of our own.”

While the church’s influence may be waning, the grip it once exerted continues to adversely affect people. Actions, alas, speak louder than words

Eventually, Peggy was buried in the church graveyard, but didn’t receive a funeral Mass, thus preserving some of Canon Brennan’s authority. Still, it is notable that no further action was taken on the spontaneous anti-clerical behaviour. Meanwhile, Peggy’s daughter, Breda, was raised by her grandparents, growing up to be a sweet and innocent girl, albeit one with intellectual disabilities.

But there was to be no happy ending, as Keane makes clear. In 1964, when Breda was 18, “church and state made another life-changing intervention”, wielding institutional power with a callousness that has to be heard to be believed. Suffice to say, Keane is correct to say that “what happened in 1946 continues to have a real and lasting impact up today”. It’s a devastating tale, told with aplomb: even the sentimental musical backdrop amplifies the heartbreaking effect of the programme’s closing moments.

Moreover, the documentary illustrates that while the church’s influence may be waning, the grip it once exerted continues to adversely affect people. Actions, alas, speak louder than words.

Radio Moment of the Week: Sean Spicers up Miriam’s show

Today With Miriam O’Callaghan (RTÉ Radio 1, weekdays) features a lively conversation with Sean Spicer, former press secretary for US president Donald Trump. Much mocked during his White House stint, Spicer is a gregarious if slightly tone-deaf guest as he revisits his most infamous moment, when he claimed numbers at Trump’s inauguration were greater than they were.

Spicer recounts trying to explain to the press that there were more viewers in person and around the globe than before, but did so cackhandedly. It’s entertaining to hear O’Callaghan pressing Spicer, first with sympathy then with uncharacteristic tenacity. His claim, she says, was “a lie”. A spluttering Spicer denies this: “There’s a difference in not doing something well and intentionally trying to lie. I tried to change the argument.”

Well, it makes a change from “fake news”.