Rose of Tralee review: ‘We need to look past the colour of our skin’

TV Review: The Rose of Tralee has been slow to accept the reality of modern Ireland 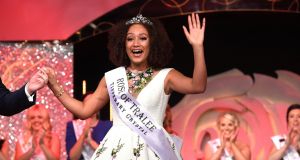 Every year I watch the Rose of Tralee I am left with that uncomfortable, disempowered feeling of disappointment.

Disappointed that it hasn’t changed, hasn’t responded to calls for modernisation or followed the lead of its competitors; talented, able young women who must themselves feel they are being silenced by its conservatism.

Ireland was not too afraid to confront such issues, not so conservative as to push the problem underground. But the Rose of Tralee has been slow to accept this new reality.

On the second night of the show it was disappointing again to hear so much about boyfriends and fiancés. Simply having one seems to routinely elicit hoots and hollers. And if it’s just a boyfriend, when will he be the fiancé? And if you don’t even have a boyfriend (God love ya!), maybe one of these escorts could save you from your sorry state?

On the second night, we met London Rose Grainne Hawkes who works as a solicitor in London having achieved a first class honours degree in law from Trinity College Dublin. She can really sing, too, as she showed us with her rendition of She Moved Through The Fair.

Most telling about her appearance, however, was the presence of her grandmother, 98-year-old Nora, who was awarded the honorary rose title. Grainne tells us that if she could, she would make her Granny Nora the 58th rose – which makes you wonder how many others are doing this for their grannies too.

Most of all, I am disappointed that we rarely learn anything real, or meaningful, about the women themselves. Because for the most part, we heard very little outside of the norm; apart from the story of Carlow Rose, Shauna Ray Lacey.

On the first night, she told us about her parents’ heroin addictions. Her father died four years ago after he succumbed to an infection following heart surgery. He had been clean for two years. Her mother has been clean for four years now after discovering she was to become a grandmother.

On the first night we also met this year’s winner, Waterford rose Kirsten Mate Maher, a 21-year-old student who is only the second ever mixed-race winner – following Luzveminda O’Sullivan who won in 1998.

Maher, like most of us, doesn’t think her race should matter though. When Daithi O Se asked her about media outlets focused on her skin colour rather than her achievements, she said: “I suppose I’m the same as any other girl sitting here doing the Rose and they touched off one teeny little part of what is me, when there are thousands of other things about me that are there to be spoken about.

“It shows that we need to look past what we look like, the colour of our skin or our hair, our religion, anything like that, we’re all the same.”

The second night of the competition provided no such insight. Instead, we had the rather mind-boggling combination of Usher and Irish dancing from Boston and New England Rose Sorcha Rochford. We also an appearance from Jerry Springer, who came on to wish the women good luck and ask Daithi out for a pint. Then there was James Patrice dressed up as Fungi – make of that what you will.

Overall, we learned very little about the lives of women in contemporary Ireland, or overseas. We learned lots about boyfriends and grannies and the importance of the Catholic faith.

The Rose of Tralee has to change. It has to become more than just a lovely girls competition; it has to start empowering women, telling their real stories and struggles and achievements. Because Ireland has changed, and it isn’t looking back.