Podcast of the week: An emotional journey into the Muppets 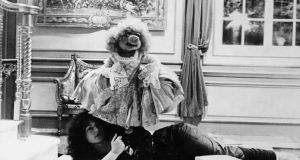 Louise Gold, one of the puppeteers and voices of the Muppets

Liam Geraghty hosts this insightful interview with Louise Gold, one of the puppeteers and voices of the Muppets. Gold is a lively storyteller, and brings us right into what it was like for her as a 19-year-old actor, called in for an audition to be a puppeteer for The Muppet Show because she was tall. Height mattered, given the physically demanding nature of operating Muppets from under a stage. She paints a vivid picture of what it was like being part of the family of weirdos who made the Muppets what they were.

The podcast is a gorgeous mix of interview and archive audio from The Muppet Show, which gives it a great sense of place and depth.

Inevitably, the conversation turns to the death of Jim Henson, and the true heart of this interview becomes about being part of a legacy and a culture. There is something distinctly uncommon about listening to someone talk so passionately about belonging to a creative team. An excellent companion piece to this listen is the final episode of The Muppet Show, wherein the Muppets themselves mourn Henson’s passing. Gold is still working with puppets along with Henson’s daughters, and this revelation feels like an emotional crescendo within the interview.

Meet Your Maker spends each episode focused on somebody behind the scenes of a media property, or television show, whose experience we otherwise wouldn’t know about. Voiceover artists, comic illustrators, even one of the writers from Sesame Street. It is hard to listen and not want to become a maker yourself.

Clarification: an earlier version of this review referred to audio glitches in the podcast. It has been pointed out that these glitches arose at the server level and not in the original produced episode. The server problem is currently affecting a large number of different podcasts and is being addressed by the service provider.