Mary McAleese: ‘As a family, we were just devastated’ 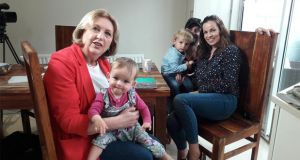 When Carol Lennon opens her door to Mary McAleese, her dog becomes too enthusiastic as it joins the welcome. “He’s assassinating the President!” Carol shouts. “Stop!”

There are many examples in Mary McAleese’s Modern Family (RTÉ One, Wednesday, 9.35pm) of how much Irish society and Irish families have changed in the 40-ish years between papal visits, but none quite as gleeful. Here is a former president, arriving unescorted to a family home in Co Meath, an approachable authority figure greeted with reciprocal honesty and good humour, not timidity and deference.

Compare that to one person’s memory of Pope John Paul II’s visit in 1979: “It was a difficult time in Ireland. And someone of that calibre thought we were good enough to come see!”

Throughout the programme, you get a sense of a nation’s hard-won confidence, its myriad different families, and their right to be recognised.

That is not happening with Pope Francis’s visit to Ireland for the World Meeting of Families, which removed images and references to LGBTI+ families from its literature, sending a message, both deliberate and hurtful, that not all people are good enough to be seen.

“As a family, we were just devastated,” McAleese says of her own family. Her son Justin is a gay man and was a public campaigner in the 2015 Marriage Equality referendum. “We realised we were not welcome.”

As the church lags centuries behind the times, resisting change, shielding abusers and castigating victims, many more feel excluded. McAleese, a trenchant critic of religious intolerance, is remarkably even-handed in assessing the role of spirituality and the church in modern Ireland. It’s the people who are adapting, often to “cultural Catholicism”, even as Irish culture divests itself of Catholicism’s more oppressive hold.

The mother of one “blended family”, with children by previous relationships, has her child baptised for the sake of the schools; a devout mother of 11 now finds “the presence of god more outside the church”; and Lennon, whose assassin dog is still at large, was carried through single motherhood, financial hardship and the challenges of raising four autistic children by her faith, but not for an institution. “I believe in God, and all that,” she says, “but I think the church is very corrupt.”

McAleese paces outside the World Meeting of Families construction site in the Phoenix Park, where the papal mass will be held, and the show hardly needs to argue hard that other religious structures are buckling.

Among its supporters there is much hand wringing. The church is caught “between a rock and a hard place”, says sociologist Tom Inglis, while adherents are “drifting towards a form of cultural Catholicism which is, in many ways, Protestantism”. Of course, that would be an ecumenical matter.

More moving, though, is the story of Erney Breytenbach and Vivian Cummins, a mature same-sex couple, who fostered a five-year-old boy, Brandon, in rural Ireland. “At the end of the day the lads gave me the nourishment, the care, everything I needed,” says Brandon, now 18.

The programme knows that such families must be seen, appreciated and welcomed. If the church becomes graceless, we can believe in each other.

The Late Late Toy Show: Everything you need to know
10