Review: The Hunger is all the better for being a thoroughly conventional documentary 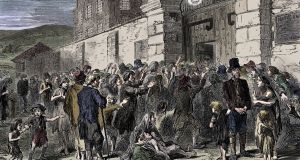 The Story of the Irish Famine: starving people at a workhouse gate, in an illustration from The Life and Times of Queen Victoria, by Robert Wilson. Photograph: Print Collector/Getty

The Hunger: The Story of the Irish Famine (RTÉ One, Monday, 9.35pm) is a thoroughly conventional retelling of one of the darkest chapters in Irish history – and it is all the better for it. Featuring quietly authoritative narration by Liam Neeson and the customary talking-head historians, it is as solid and traditional as a piece of heirloom furniture.

Neeson, accompanied by moody panning shots of the Irish landscape, takes us from the origins of the Famine up to “Black ’47”, the bleakest year of this incomprehensible calamity. Conjuring up his finest “I will look for you, I will find you” growl, from his Taken movies, he describes how, impoverished and downtrodden, Ireland was already teetering before the potato blight struck.

A doctor writes, of a mother who has placed her dead child’s body in the muck with the pigs, that rampant cholera and dysentery mean nobody will bury the boy for her

A contrast is drawn between governments on the Continent, with their relatively swift and humane responses to the failure of the crop, and the foot-dragging of the government in London. Such altruism in France, Belgium and the Netherlands had the ulterior motive of keeping a lid on dissent and stymying potential peasant uprisings, but it at least prevented the mass starvation that ultimately struck Ireland. Here, Britain’s patrician condescension towards the population gave way, after an initially relatively effective intervention by Robert Peel, to cruel indifference. Nor did the Continentals share the opinion of Charles Trevelyan, charged with overseeing food supplies in Ireland, that the blight was God’s way of punishing the indolent.

The sheer horror of the Great Famine is devastatingly conveyed with contemporaneous accounts. These paint a portrait of a society that has collapsed. A doctor writes, of a mother who has placed her dead child’s body in the muck with the pigs, that rampant cholera and dysentery mean nobody will bury the boy for her. The doctor agrees to do so – and in the end puts in the ground not just the child but his two siblings and mother too. “Ireland has become a vast tomb,” writes a monsignor in France. “Bodies left for weeks. People eaten by dogs,” a Rev Francis Webb says. “Are we really living in a portion of the United Kingdom?”

‘The British abandoned people to starvation,’ says Prof Kevin Whelan. ‘At the highest level of government there was a sense that this ultimately wasn’t their problem’

The Hunger is produced in association with University College Cork, which published the Atlas of the Great Irish Famine in 2012. And the documentary marks the 175th anniversary of the beginning of the failure of the crop, in 1845. The case can be made that the Famine changed Ireland forever and that we live today in its shadow. This tricky question of aftermath and legacy will be explored next week, in part two.

Left for another time is the debate about whether the Great Hunger qualifies as genocide as we define it in the 21st century. But the writer and director of the documentary, Ruán Magan, who also collaborated with Neeson on 1916: The Irish Rebellion and with Cillian Murphy on last year’s The Irish Revolution, does not flinch from blaming London.

“The British abandoned people to starvation,” says Prof Kevin Whelan of the University of Notre Dame. “At the highest level of government there was a sense that this ultimately wasn’t their problem”.