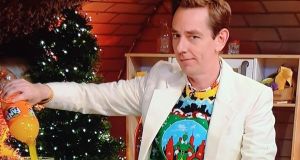 Ryan Tubridy on The Late Late Toy Show: Swore after accidentally spraying himself with fizzy orange

As regular listeners will know, Ryan Tubridy starts each week of his show on RTÉ Radio 1 looking back on the previous Friday’s Late Late Show, even when his television talkshow has been so lifeless that “postmortem” is the most apt term.

This Monday, however, there’s a lot for Tubridy to discuss after the weekend’s Late Late Toy Show, from the remarkable young guests and the memorable celebrity cameos to the €6.4 million donated by viewers for children’s charities. But, for all that, there’s only one thing, or more precisely one word, we want to hear: the expletive he uttered on Friday after accidentally spraying himself with fizzy orange.

Tubridy is understandably in good form about the festive show – “We brought a lot of Oz to Kansas,” he says – and although he initially sounds mildly perplexed at the attention the incident has garnered, he addresses it jocularly rather than contritely. “It’s live, there’s kids, it’s Christmas, what do you expect? The unexpected,” he explains. He light-heartedly muses about having a tribunal of inquiry to investigate if the bottle of Fanta was deliberately shaken before he opened it, and seems rather chuffed by the gleeful social-media reaction that followed. “My phone melted.”

Tubridy insists he used a nonprocreative profanity. ‘Listen closely,’ he says, and you will hear that he actually used a ‘B-bomb’ that rhymes with ‘pollocks’

But Tubridy flatly denies that he used the F-word. Instead the host insists he used another, nonprocreative profanity. “Listen closely,” he says, and you will hear that he actually used a “B-bomb” that rhymes with “pollocks”.

With the crucial moment now mysteriously edited on the RTÉ Player’s playback edition, this is hard to verify. Repeated listening to clips on social media doesn’t settle the matter, either, with the key phrase muffled by voices and exploding bottle tops, although the second syllable sounds more like “sake” than “-ocks”.

Whether it was a muck-up or just a load of frolics, Tubridy treats his gaffe with the gossamer-weight gravitas it deserves. He doesn’t grovel for forgiveness. Indeed, he doesn’t offer any regret at all, saying that he’s “no angel”.

But, ultimately, there’s no need for him to dwell on a slip-up that ultimately only added some mild spice to a triumphant evening. He prefers to focus on the poignant yet positive stories and innocently uplifting moments he hosted on The Late Late Toy Show, and rightly so.

No matter WTF he said, Tubridy follows the immortal advice offered by the Sex Pistols: never mind the b***ocks.