TV review: Belsen’s ageing survivors are not phlegmatic or philosophical about what happened 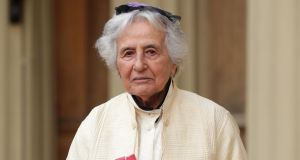 Anita Lasker-Wallfisch, whose life was spared as she was en route to the gas chamber at Auschwitz and it was discovered she could play cello

It’s the tiny details that make Belsen: Our Story (BBC 2, Tuesday, 9pm) so horrifying to sit through. One survivor of the Nazi death camp recollects the “bump, bump, bump” sound of a head against the floorboards as he and other children were required to drag the bodies of the dead across the uneven floor to the charnel heap outside.

Another recalls his infant sister dying and a member of the family carefully placing the remains on a pile “with the other corpses”. He blinks away tears as he contemplates a wound that can never heal.

This year marks the 75th anniversary of the liberation of the camps. At such a remove, it would be easy to conclude there is nothing more to say about the Holocaust. But Tom Stubberfield’s understated documentary serves as an urgent act of bearing witness as the world once again faces a resurgent right wing (though he isn’t so gauche as to spell this out).

“There was a point where I couldn’t differentiate between what happened to me and what I thought what happened,” says Maurice Blik, whose family was imprisoned by the Nazis after Amsterdam fell. His baby sister died at Belsen, just weeks from her birthday. He recall this clearly as he had made a gift for her: a boat fashioned from a carrot and some twigs. “I felt like a failure,” he says “I couldn’t keep this little child alive.”

Belsen-Bergen is today a forsaken stretch of scrub and woodland. The British, when they liberated it, couldn’t believe the inhumanity and burned the camp down on the spot. They also put on trial the guards, including “Butcher of Belsen” Josef Kramer and his lover Irma Grese.

“She was such a bastard,” says Anita Lasker-Wallfisch, whose life was spared as she was en route to the gas chamber at Auschwitz and it was discovered she could play cello (she was later transferred to Belsen as the Nazis fled the Red Army). Instead of being fed into the death machine she joined the camp orchestra.

“I have been asked, ‘how could you possibly play music in Auschwitz?’ You arrive prepared to go into a gas chamber. Someone sticks a cello into your hand and says ‘play something’ – what are you going to do? ‘ I’m sorry, I only play in Carnegie Hall?’”

The survivors are all in their advanced years now. Yet none are phlegmatic or philosophical about what happened. Their anger burns bright. You can see it in the blazing eyes of Blik, who went on to become an acclaimed sculptor.

And you can hear it in Anita Lasker-Wallfisch’s voice. She had lived when she might have died. Others who might have lived had perished. “There must be a purpose in surviving,” she says. “My purpose is to speak about it.”

Patrick Freyne on Love Is Blind: It’s Gilead, Love Island and Blind Date rolled into one
2

Caribou’s Dan Snaith: ‘A lot of pop music is really challenging and interesting’
10