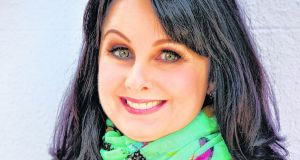 Marian Keyes: feck is “nothing like the other word, the one with the u”

With British prime minister Boris Johnson not long departed after a flying visit to Dublin, and the Irish question and backstop being hotly debated across the UK, what better time for Irish novelist Marian Keyes to go on radio to explain the Irish to the English?

Ireland and the Irish is the theme of the first episode of Between Ourselves with Marian Keyes on BBC Radio 4, which is based on writing from her bestselling non-fiction collections Under the Duvet and Making It Up As I Go Along.

Because the programme is primarily for an English audience, Keyes begins by explaining a lexicon of Irish words that appear often in her writing, including the ubiquitous grand.

“If someone says they are grand,” says Keyes, “it means they are carrying at least two injuries and they’ve just had a bit of small but really quite wounding bad news.”

The word feck, she says “is as benign as it could be, nothing like the other word, the one with the u. Politicians say it, the pope if he could speak English would say it, it’s completely innocuous”.

Eejit, she says, is a word with no real malice in it, “ a scatty person who has a tendency to leave his jacket on the bus”.

The new show, produced by Steve Doherty of Giddy Goat Productions – the team behind Meet David Sedaris the hit radio 4 programme – is recorded in front of a live audience in London, with Keyes in conversation with fellow writer and activist Tara Flynn.

The pair, who are friends and have obvious chemistry, discuss the changes that have happened in Ireland in the last couple of decades. with Keyes saying that until 1998 “everything in Ireland was in black and white”, and that “going to confession counted as a social life”.

The late Irish author Maeve Binchy was a Radio 4 favourite, appearing on programmes such as Woman’s Hour and Keyes has the same charming, engaging style of conversation

Keyes reads Passport Out of Here, a highly entertaining essay about losing her passport and trying to get a new one at the Irish embassy in London where she was asked: “Have you prayed to St Anthony?”. Introducing another essay, Do You Know The Bus Stop in Kilkenny?, Keyes explains that giving convoluted directions in Ireland is an “artform” and that telling someone to use the SatNav to get to your house would be like “inviting them to dinner and asking them to bring their own food”.

This is the author’s first radio series and the opening episode is 28 minutes of light relief in a Brexit-weary Radio 4 schedule.

Keyes’s next book, The Grown Ups, will be published by Penguin on February 6th next year – but until then, fans could do worse than tune in to next week’s episode on a theme close to the writer’s heart – family.

Between Ourselves is on BBC Radio 4 on Wednesdays at 11.30am

Helen Steele: ‘I left school with crippling shame about my intellectual capabilities’