An army of fake Twitter accounts invades Ireland. Why? 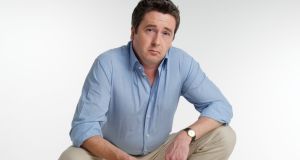 Philip Boucher-Hayes: ‘I didn’t suddenly become 10 times more interesting between the end of August and the beginning of September’

At the end of August, the RTÉ broadcaster Philip Boucher-Hayes noticed something strange happening to his Twitter account. His popularity started to climb, rapidly.

Ordinarily, his followers might increase by 100 to 150 a week. “When you start a new series on TV, there might be a bit more attention for a while. But suddenly at the end of August I started getting 10 times the number of followers, this huge, huge leap. I signed up to one of those tracking accounts telling me how many people were signing up, and my intuition was right. It had gone from 150 to 1,500. Last week there were 1,991 [new followers].

“I didn’t suddenly become 10 times more interesting between the end of August and the beginning of September. There’s nothing above board that explains that.”

There are mutterings on what can loosely be described as “Irish Twitter” about the growth of spam or “bot” accounts, as several high-profile Irish Twitter accounts have observed a marked increase in their followers, and a disproportionate number of accounts following them that look suspicious – primarily accounts that have Irish-sounding names but no profile photos, no tweets, and sometimes with eight digits following their account name.

Spam consists of unsolicited messages sent online, a bot is a something that runs automated tasks. Some bots are perfectly innocuous, like an account tweeting a daily Shakespeare quote; others are utilised for more nefarious means.

They achieved a kind of notoriety given the perceived influence of bots in Donald Trump’s election and the Brexit vote.

Bots can follow certain people to give the perception of popularity to a particular account, can engage in mass retweeting activity to amplify certain hashtags, or can carry content that stokes arguments.

A spokesperson for Twitter – when approached by The Irish Times on this subject – said: “As patterns of malicious activity evolve, we’re adapting to meet them head-on. On average, our automated systems catch more than 3.2 million suspicious accounts globally per week – more than double the amount we detected this time last year. As our detection of automated accounts and content has improved, we’re better able to catch malicious accounts when they log into Twitter or first start to create spam.”

The spokesperson said Twitter currently catches about 450,000 suspicious log-ins per day. It stopped more than 5.7 million “spammy follows from a single source” in one week.

“Since June 2017, we’ve suspended more than 117,000 malicious applications for abusing our API, collectively responsible for more than 1.5 billion low-quality tweets this year.”

As social media platforms come under increased scrutiny for their role in facilitating the spread of fake news, as well as their perceived vulnerability to political propaganda, Facebook and Twitter are being examined by FBI special counsel Robert Mueller in the ongoing investigation into Russian interference in the 2016 US presidential election.

This week, Twitter banned ads from media organisations Russia Today and Sputnik, citing allegations of their attempts to interfere in the 2016 US election.

Dr Iulia Cioroianu is a research fellow at the Q-Step Centre for Quantitative Social Sciences at the University of Exeter. With Prof Susan Banducci, she conducts research on political information exposure on social networks.

“Our understanding is that they are strategically generated and managed by actors that have certain interests,” Dr Cioroianu says of large numbers of bot accounts.

In the multiple unknowns of the current Irish context, these interests could be commercial, political, social, or just plain disruptive for the sake of it. Or it could all be a massive coincidence, or something that initially seems alarming but is never activated.

More research is emerging about the role bot accounts played in the recent UK election, the US election, as well as other elections around Europe. What is more ambiguous is that bots are not necessarily created by partisan forces to boost the popularity of a particular politician.

“What we have noticed is often times these automated accounts may not be to support a particular political actor, but to create contentious arguments to keep the debate going on topics that are seen as very divisive topics,” Dr Cioroianu says. “What we call in political science, social policy topics . . . participating in conversations about abortion, gun control, gay marriage . . . These would be the ones that are strong and hot social issues in the US, and you do see a lot of bot activity on these issues.

As to who is behind such engineering of divisiveness, she says, “we can’t speculate on this. We don’t know who owns them. We don’t know who is programming them, who is controlling them. There can be theories about who may be interested in political polarisation or ideological polarisation in western democracies – there are different political actors who may be interested in that – but we really don’t know.”

From a researcher’s perspective on this Irish context, the fact that people are noticing potential bots or potential spam accounts (if that’s what they are) before they are activated (if that’s what’s ahead), is unusual.

Dr Cioroianu and her colleagues examine the impact of bots on political discourse online after they are activated and when they are participating in such conversations. It’s impossible to draw any conclusions whether accounts perceived as “fake” on “Irish Twitter” are being made by a single person or entity, or to know what – if any – motivations are at play.

Boucher-Hayes is waiting to see what the accounts do next, saying he “came to the conclusion that somebody somewhere is doing this on an industrial scale. What purpose they’re doing it for, I don’t know. It’s as likely to be something commercial as it is political. There is an army of these accounts now sitting there. Since August, in the region of 20,000.”