Why Marvel’s Inhumans is such a flop

Review: Here are the scrapings from the bottom of the Marvel Cinematic Universe 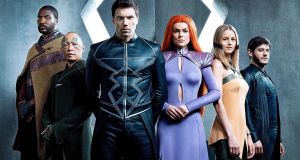 Inhumans stars Anson Mount and Serinda Swan, whose surnames combined sound like something Zeus would try at his absolute worst

Once thought to be infinitely expanding, it turns out that even the Marvel Cinematic Universe has its limits. The clearest effort to map those finite dimensions now arrives in the form of Marvel’s Inhumans (Sky One, Wednesday, 9pm), a television show that takes place between the craters of the Moon and the more verdant craters of Hawaii.

It suggests that the Marvel comic-book stable is much smaller than its cosmologists first believed. Indeed, as a range of superhumans are revealed, each of whom must have failed the auditions for Avengers and X-Men, you get the sense that the MCU is probably barrel shaped, and here are the scrapings of its bottom.

“What if I told you there was a place where we are all inhumans: the city of Attilan?” says a green-skinned amphibian with a fin that rises from his head like a Mohawk. This is the precise moment that anyone above the age of 12 will give up on the show, and that’s a problem for two reasons: One, it occurs less than two minutes into the first episode; and two, it is broadcast after bedtime on a school night. You monsters!

The whole enterprise is jaw-droppingly silly; a childish fantasy better suited to the shoulder-shaking verve of a Saturday morning cartoon. Its heroes are swooning, near-mythological visions plucked from the distracted doodles of a stuffy classics lesson: winged girls, convulsing prophets, a guy whose special power is basically pessimism. To make things cringier, it is all realised with a touchingly frugal budget.

The Inhuman Royal Family is led by king Black Bolt, a frowning mute (his voice, a devastating weapon, is kept in check), and his queen and spokesperson, Medusa, whose red hair coils and snaps like the snakes of her mythological forbear. (The only other connection is that her acting range, like everyone around her, has long since been turned to stone.) Neither monarch’s identity is quite as evocative as the sensationally named actors who play them, though: Anson Mount and Serinda Swan, whose surnames combined sound like something Zeus would try at his absolute worst.

Anyway, when Black Bolt’s Machiavellian brother Maximus – played by Game of Thrones psychopath, Iwan Rheon – stages a coup, the Royal Family flee their invisible, hierarchical base on the moon (no, really), with the assistance of a teleporting pug the size of a Jersey cow (no, really) and find themselves scattered among the tourists, surfers and law enforcement officers of Oahu, Hawaii. It doesn’t seem accidental that the surfers – all chill, all the time – are unfazed to have a behooved soldier called Gorgon in their midst. “You must be one of those Inhumans I’ve read about,” nods a man who gives no outward impression of bookishness.

He may be in a minority. Vastly overshadowed by the other properties in Marvel’s roster, with none of the wit or dazzle brought to the film versions, nor the ingenuity of offbeat offshoots like Legion, and certainly none of the moneyed solemnity of Netflix’s pullulating series, the fortunes of Marvels Inhumans seems less likely to rise than the Hindenburg. Oh, the inhumanity.