Brady Family Ham’s Black and Tans: the perfect ad for the Brexit era 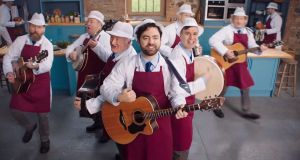 Brady Family Ham’s Black and Tans ad: the British oppressed us for 800 years, but we are so over that

While the people next door are busy wrecking their joint, shooting themselves in several limbs and annoying the entire neighbourhood for no good reason, what do the Irish do? Take the mick. They oppressed us for 800 years, but we are so over that. So much so that we can sell ham to the tune of a rebel ballad about some of the neighbours’ worst atrocities.

The new TV and radio ad for Brady Family Ham features a kitchen of guitar-wielding butchers belting out a ditty extolling the virtues of the company’s cured pork to the tune of The Wolfe Tones’ 1970s rabble-rouser Come Out Ye Black and Tans, about the ferocious Royal Irish Constabulary Special Reserve during the War of Independence.

There we are, in adland’s Brady family “kitchen”, which is full of white-coated, white-hatted men sharpening knives and taking baked ham from an oven, as the lead butcher, on guitar, rattles through: “Oh, Brady Family Ham, well it is your only man. Cured for three full days and there’s no added wa-aa-ter. Sure, it’s cooked from one pork joint, unlike others – that’s the point! It tastes just like the ham baked by your mo-oo-ther. Come out you other hams, come and face me, ham to ham...”

Coming soon from @bradyfamilyham...stirring renditions of 'Hoggy Dew' and 'A Bacon Once Again'.

The entire kitchen then joins in with bodhrán, banjo and accordion for the heart-pumping finale: “Show them how you’re made with no-oo added wa-aa-ter, and tell them how a Brady Family Ham chased you away from the green and lovely fields of Cill Da-aa-ra.”

Wouldn’t we like to have been a fly on the wall while the creatives at the Bloom advertising agency sat around the table and came up with that one for the Co Kildare food company. Yesterday’s unveiling generated some crack on social media; comments included “Coming soon from @bradyfamilyham... stirring renditions of ‘Hoggy Dew’ and ‘A Bacon Once Again’” and “I’d nearly quit vegetarianism over this one”.

Could you read even more into the ad and see it as giving two fingers to Brexit? The ad was directed by Declan Lowney, who also made Father Ted. We get it. The British brought in their big guns to colonise us in the past, but these days, as London burns with incompetence, we’ll kill them with a sense of humour. Disaster capitalists got them into this, but Irish capitalism uses laughter, with rebel songs selling hang for sangwiches. That’s mad, Ted.