This week features several digital editions of Irish summer festivals, plus a new event from The Irish Times 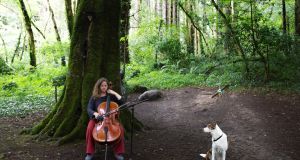 Cellist Eimear Reidy presents an arboreal project Whose Woods these are.

Dodgy weather is generally better for box office than glorious sun and the same may apply when the offerings are virtual rather than live. This coming week features a few digital editions of Irish summer festivals, plus a newbie. The Irish Times has joined the festival season with Summer Nights, a festival of conversation, culture and ideas, starting Monday, July  13th (to 16th) with a range of people who have brought us joy.

The following evenings in the Zoom festival are equally packed and varied: Anne Enright and Kathy Sheridan; Fintan O’Toole in separate events with American lawyer and political adviser Melody Barnes, and with former US ambassador to the UN Samantha Power; the Inside Politics panel; Paul O’Connell and Malachy Clerkin; and Imelda May and Róisín Ingle.

Tickets for the four-night package are €40, with subscriberreductions – or the four-day ticket is €20 using the promo code SUMMER20. irishtimes.com/SummerNights

For children there’s a live broadcast of Will Softly’s World music disco, and workshops.

As well as an online life, there’ll be real-life events and displays for Kinsale Arts Weekend (July 10th-12th), including drive-in theatre and music to enjoy from the car.

Celebrating Unesco’s recognition of the Irish harp as culturally unique, there’s a harp trail on the pedestrianised Main Street (from Bastion to Bruno’s) on Sunday afternoon. A “walking gallery” showcasing Kinsale artists has a theme of hope. Children’s work will feature in a drive-through exhibition at SuperValu’s underground car park, and Kit French demonstrates the basics of picture making and painting outside in a pre-recorded demo.

The festival commissioned composer Philip Pope to set music to Derek Mahon’s poem Everything is going to be alright, a solace during the pandemic, and it’ll be performed by a virtual choir of local singers. Another poetry event sounds ticklish – Poetry Confessions with Kinsale poets Matthew Geden, Niamh Prior and Fiona Smith, for those souls searching for poetic absolution.

Drive-in theatre is a novel concept – try it on at the Saile drive-in stage, including The Cute Whore performed by Eve O’Mahony, The Bulman performed by David Peare and three short plays directed by Yvonne Coughlan.

In the spirit of the show must go on, Irish National Opera (INO)follows its series of Friday night sessions with an ambitious and highly unusual approach to making opera while socially distanced.

The INO had to cancel two productions – Bizet’s Carmen and Mozart’s The Abduction from the Seraglio – because of Covid-19. But artistic director Fergus Sheil “could not let go of this sparkling, virtuosic opera” and the resourceful team have devised a way to mount Seraglio as an eight-part mini-series. It will be streamed on Tuesdays and Thursdays from July 7th, in partnership with Irish Chamber Orchestra, conducted by Peter Whelan.

Instead of weeks of communal rehearsal, the project involved one conductor, five principal singers, a chorus of 16, and 33 musicians, using 55 phones tablets or laptops in 55 different locations, with the recordings going to video and sound designers, also working distantly. And, says director Caitríona McLoughlin, “everyone not only delivered, but did so with finesse, generosity and extraordinary skill. And it is glorious.”

Rather than trying to replicate an opera, says McLoughlin “I approached the mini-series as a new form. It has new rules. It’s not film. It’s not theatre. It’s not opera. It’s not storytelling. It’s its own new thing.”

She says “working on Seraglio through lockdown felt to me like we were all part of some great ‘method acting’ style experiment. All abducted from our real lives and held captive inside our computer screens or rediscovering the therapeutic pleasure in domestic chores.”

Sheil adds that “we learned new skills and techniques. We put our own patience to the test as we rehearsed, staged, performed, and videoed scenes from an opera while everyone – solo singers, chorus, orchestra, creative and technical teams – operated from their own homes”.

With a cast headed by soprano Claudia Boyle, Seraglio the mini-series streams on irishnationalopera.ie from Tuesday, July 7th to Thursday, July 30th, with new episodes available from 6pm.

The fleadh opens with Aideen Kane, Lucy Kennedy and Maeve O’Boyle’s The 8th, a documentary following campaigners during the referendum on the Eighth Amendment. World premieres include Phil Sheerin’s The Winter Lake, Eoin Macken’s Here are the Young Men, Philip Doherty’s Redemption of a Rogue and Dave Minogue’s Poster Boys. galwayfilmfleadh.com