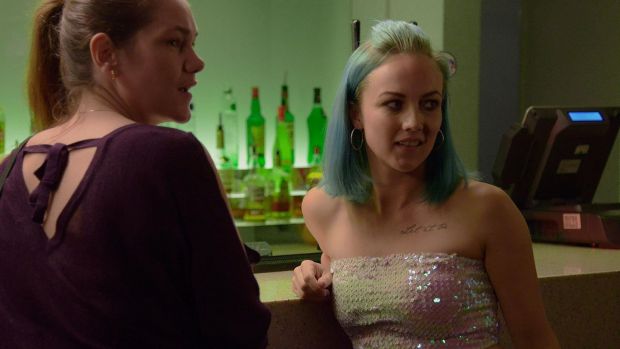 Societal expectations weigh heavily throughout the feature debut from writer-director Fyzal Boulifa. In Lynn + Lucy, curtain twitching and over-the-fence gossip eventually snowball into a witch hunt to rival that of The Crucible. Long before the figurative pitchforks come out, there’s an ugly pettiness in the working-class cul-de-sac where the two friends of the title live.

Lynn and Lucy are lifelong chums who are so close that at least one former schoolmate suggests they must be lesbians, an idea Lynn (played by remarkable newcomer Roxanne Scrimshaw) dismisses as sick.

As the film opens, Lynn beams throughout the Christening of Lucy’s son. Lynn herself has been a mother and housewife since the age of 16. The party-happy Lucy (Nichola Burley), however, is struggling with motherhood. Both women are lonely in their own homes.

Lucy’s boyfriend Clark (Samson Cox-Vinell) is useless and often glued to his phone. Lynn’s partner (Shaq B Grant) is ex-military and unable to work following an injury. He barely registers her presence and when he does it’s unpleasant. Her attempt to dress up is met with a sneering “That’s blast from the past”.

Lynn, who was known as “the pig” at school, takes a lowly job at a local salon run by a preening former classmate (Jennifer Lee-Moon). The latter remembers Lynn’s anti-Asian remarks from school and treats her accordingly. But just as Lynn is making small attempts to better herself, a terrible tragedy befalls Lucy.  Gossip and hysteria soon test Lynn and Lucy’s firm friendship and the entire community.

This is a surefooted, gripping, moving debut feature from Boulifa, a two-time winner of the Illy Prize for Best Short Film at Cannes Directors’ Fortnight. The involvement of Ken Loach and Rebecca O’Brien’s Sixteen Films is appropriate given the film’s kitchen sink leanings. The miserable social realism of Lynn’s downtrodden housewifery gives way to ill-feeling and rage.

The cast are all terrific but Scrimshaw and Burley are positively transfixing.

On BFI Player from July 3rd.