Welcome to The Supervet: Puppy Special, where Noel Fitzpatrick is like Dog Jesus 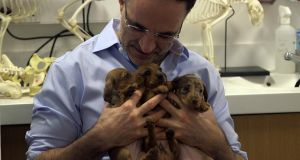 Supervet: I’d choose a warm blanket and one of those head lampshades at Noel Fitzpatrick’s dog-fixing emporium over a spell at the Mayo Clinic

If I told you that my favourite things were puppies, the insides of puppies and people crying, your response would probably differ depending on your profession. If you were a psychologist, for example, you’d suggest I come in for a session. If you were a police detective you’d say nothing and just order some surveillance. If you were the producer of The Supervet: Puppy Special (Thursday, Channel 4) you’d say “Well, you endearingly sentimental sociopath, I have just the show for you!”

I’ve said it before and I’ll say it again – if I had the option I’d choose a warm blanket and one of those head lampshades at Supervet Noel Fitzpatrick’s dog-fixing emporium over a spell at the Mayo Clinic. I’d choose this even though it might mean Noel has to put me to sleep. “I’ve had a good innings!” I’ll declare as he stares at me with those dark Laois eyes.

Each episode follows the same pattern. We meet tearful families and their poorly pooches who limp or gaze out of carrycases with dejected expressions on their furry faces. Noel’s face fills with delight at each cavorting canine and then, swiftly, fills with great sorrow, for Noel appreciates the pain of all living things, especially you.

This week all of the dogs who appear are puppies (it’s foreshadowed by the title) – bulldog puppies, sausage dog puppies, mutt-like puppies, westies (as in the dog westie, not the west Dublin gangsters, although I like the idea it could be both and that Noel is a mob dog doctor). Anyway, the sight of these puppies causes my wife to have a sort of aphasic episode, rolling around on the couch muttering “P...p… puppies!? PUPPIES!” I feel the same but I’m an experienced television writer so I can control myself. I say, suavely: “My diagnosis is that these dogs are cute as hell!”

My wife doesn’t appreciate how witty I’m being because three sausage dog puppies are now peering from a box and her eyes have completely dilated and she’s looking at her hands for light trails and saying the word “puppies” over and over.

I say it again: “My diagnosis is that these dogs are cute as hell!”

Sadly, Noel is a professional dog physician (or “vet” as they’re known in the business) and his diagnosis is that these dogs have serious injuries. One cute little fella doesn’t have back feet. This is genuinely upsetting. Fitzpatrick is a warm-hearted innovator and he’s the best at what he does. He offers to fit bionic feet and spinal bolts to these hapless hounds and, eventually, out come the bone saws and drills and soon there’s blood everywhere (I’m pretty sure Fitzpatrick has at least considered creating a bionic dog army).

Then there’s a puppy getting aqua-therapy, some more (justified) weeping, more graphically depicted dog surgery, some tension and then, after that emotional whirlwind, we see happy bounding dogs being reunited with their delighted owners and Noel saying something like, “This day you will be with me in paradise” because he’s essentially Dog Jesus except, you know, without the institutional abuse. Seriously though, Supervet is very wholesome and very good and Fitzpatrick is kind and clever and the pet owners are sweet and caring and THERE. ARE. PUPPIES.

There are also puppies on Paw Patrol (daily, Nick Jnr) but these puppies have come to signify the banality of end stage capitalism. On one of this week’s episodes, entire emergency services of Adventure Bay have been called in to deal with a baby bat sleeping beneath the town hall’s bell.

That’s what you get when you outsource the bulk of public service provision to the child and canine dominated private sector – expensive state of the art helicopters and fire vehicles being dispatched to deal with one solitary sky rodent. Yeah, the programme makers don’t stick around for the invoicing process, but someone has to pay the bills and the town’s perpetually panic-stricken mayor keeps a chicken in her handbag so she doesn’t strike me as someone who has a good handle on the town budget.

Now, I haven’t watched Paw Patrol in a while. I’d partly expected Ryder’s canine-themed start-up to have branched out into social care and prisons by now, but no, he seems to have pivoted not a whit from his original vision. This was surely touted originally at some iteration of the Web Summit or Davos or the Fianna Fáil Tent at the Galway Races: “What if we were to invest in a hugely high-tech emergency operation but saved money by having it staffed by dogs?”

And if there was ever a good thesis statement for outsourcing public services you more or less have it there. There is, as far as I’m aware, no minimum wage for dogs so, to quote Ronald Reagan, “kerching!”

Of course, thanks to coronavirus, the glory days are over and the big state is back, so expect Ryder to soon swap his vogueish entrepreneur’s puffa jacket and gelled hair for a sports coat, jeans and beard as he pivots towards public sector consultancy. Yes, Chase, Rubble and co will soon be public servants along with other outlandish characters like Postman Pat, Tweaky from Buck Rogers and Ryan Tubridy.

“These aren’t puppies!” my wife says as I watch Colin Stafford-Johnson’s excellent Wild Cuba (Sunday, RTÉ1). She’s just getting over Supervet: Puppy Special and now Stafford-Johnson is sitting in a cave as Cuban boa constrictors snap at fluttering bats with their fangy jaws.

“They are puppies,” I lie. “They’re slither-puppies and sky-puppies. Look, that slither puppy is playing with that sky puppy. He’s playing with him good.”

This all comes at the end of the first part of Stafford-Johnson’s typically beautiful documentary. I’ve already met the world’s smallest hummingbird, some fearless migrating crabs and an endangered species of woodpecker, and at no point did I think, “Why don’t these animals have jobs? Are the fire department hiring?”

That’s because, like all good wildlife programmes, Wild Cuba is meticulously and painstakingly filmed and bittersweetly elegiac and it’s both calming and worrying. Stafford-Johnson softly observes each little thing he sees in Cuban waters, woodlands and streets as though it might be the very last time. In some cases, it might very well be. While Supervet helps injured animals, Stafford-Johnson documents whole endangered species. When we leave him, he’s sitting in a cave watching snakes trying to catch bats. “[It’s] not everyone’s cup of tea but it is mine,” he says. “I couldn’t be happier.”

TV Guide: 30 of the best shows to watch this week
8