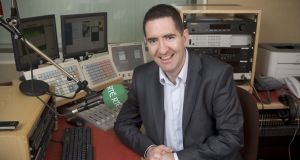 Cormac Ó hEadhra: the RTÉ Radio 1 presenter is not a natural diplomat

Just for a minute, as Cormac Ó hEadhra and his guests discuss the formation of the new Government, it’s almost like old times. And, no, it’s not just because once again a Fianna Fáil Taoiseach is presiding over a collapsed economy. Rather, the flurries of political sniping that Ó hEadhra presides over – and occasionally inflames – recall days when everything seemed simpler, even bitter electoral contests.

Actually, last weekend’s Saturday with Cormac Ó hEadhra (RTÉ Radio 1) takes a while to heat up, suggesting that the host and his panel of politicians and pundits have lost some match fitness during the pandemic. Following a live feed of Micheál Martin’s acceptance speech as Taoiseach, the guests start off in relatively courteous mood, offering congratulations of varying warmth on the Fianna Fáil leader’s elevation.

After a while Ó hEadhra seems to grow impatient with this outbreak of civility, and pitches questions designed to cause bother. “What nice things would you like to say about your Fianna Fáil Taoiseach?” he asks the Fine Gael Senator Barry Ward, who doesn’t take the bait, opting for dutiful politeness towards his party’s historic rival and new Coalition partner.

‘These are the parameters of the Dáil to come,’ Cormac Ó hEadhra predicts after some tetchy exchanges, although he doesn’t seem unhappy at the prospect, not being a natural diplomat himself

But eventually proceedings take a more familiar turn, as Ward gets into a slanging match with the Sinn Féin Senator Lynn Boylan, the former defending the exclusion of the Shinners from the talks on the basis that his party had made a “sacrosanct” pledge to that effect. By the end Boylan is excoriating the housing policies of the Government – at this stage less than an hour old – while Ward accuses her “throwing mud”.

“These are the parameters of the Dáil to come,” Ó hEadhra predicts after these tetchy exchanges, although he doesn’t seem unhappy at the prospect, not being a natural diplomat himself. It remains to be seen whether the end of Civil War enmities heralds fundamental political realignment, but on this showing the standard of debate will be as rancorously inconclusive as ever. Some things are immune to the effects of Covid-19.

Party-political intrigue continues to distract from the reality of the coronavirus pandemic on Monday’s Drivetime (RTÉ Radio 1, weekdays), when Mary Wilson interviews Fianna Fáil’s deputy leader, Dara Calleary, about being passed over for ministerial promotion. With Calleary having earlier voiced annoyance at the snub on local radio, Wilson is keen to further fan the controversy on the national airwaves. “You were upset this morning,” she says, teeing up her guest. But he doesn’t oblige her.

Although Calleary talks of being disappointed for himself and for his Mayo constituency, he focuses on the upsides of his new job as the Government’s chief whip: he’ll be still sitting at the Cabinet table, he repeats several times. In much the same fashion as Ó hEadhra, her station colleague, Wilson has little tolerance for such positive sentiments. Instead she mixes unconvincing expressions of sympathy for her guest with gilt-edged invitations for him to dump on his leader.

So wilfully sustained is Mary Wilson’s interrogation that one begins to feel twinges of pity for Dara Calleary. ‘Best wishes in your new role,’ she says brusquely, bringing the interview to a conclusion

“You had Micheál Martin’s back,” Wilson observes before asking why the Taoiseach overlooked him. She wonders why Martin left Calleary waiting until last when handing out jobs, before again reminding him that he was overlooked. She contrasts his job with that of the Fianna Fáil arriviste Stephen Donnelly, newly installed as Minister for Health. Eventually, Wilson tires of asking questions, and tells her guest what she wants to hear. “It’s difficult for you, difficult for your family, difficult for Fianna Fáil,” she says.

So wilfully sustained is Wilson’s interrogation that one begins to feel twinges of pity for Calleary. In the end he allows that “it wasn’t what I expected” but adds that his disappointment is minor compared with the grief of those who’ve lost relatives to coronavirus. Rather than being a distracting platitude, it’s a reminder that people have bigger things to worry about, although one wouldn’t know from Wilson’s fruitless persistence. “Best wishes in your new role,” she says brusquely, bringing the interview to a conclusion.

It’s a rare misfire from the host, who has brought authority, inquisitiveness and sensitivity (not always her most obvious quality) to her tenure throughout the pandemic. With luck the resumption of politics as usual won’t distract Wilson from such strengths.

Of course a mere event such as a new government cannot keep coronavirus off the airwaves for long. Sure enough, Tuesday’s edition of News at One (RTÉ Radio 1, weekdays) carries an interview that dispels the notion that youth is an effective vaccine against the virus. Áine Lawlor, its presenter, talks to Michael Prendergast, a 28-year-old Kerry man who made the news in March when he spoke about being hospitalised with Covid-19. Although he survived, like practically every healthy young person who has caught the virus, his recovery has been painfully slow.

“It’s taken 14 weeks for any semblance of normality,” Prendergast says. He recounts having to return to hospital twice, suffering from extreme fatigue and being overwhelmed by panic attacks. Despite there now being “light at the end of the tunnel”, he has been told it could take six months to recover fully from pneumonia brought on by the virus, which may leave scarring on his lungs. “It’s a nightmare,” he says.

‘Covid lulls you into a false sense of security, that you’re okay now, and then it will come back. This is its modus operandi: it will come and go in waves.’ One can only hope this doesn’t prove a prophetic statement about coronavirus in general

Lawlor, as compassionate a host as she is a curious one, is moved: “My heart goes out to you.” But she’s also interested in the wider implications of her guest’s story, particularly regarding young people “partying” again. Prendergast sees this as a double-sided question. Socialising is important from a mental-health perspective, he says – “There’s nothing worse than being sick at home with only yourself to focus on” – but worries about the effects of alcohol on the immune system, never mind other inhibitions.

Ultimately, Prendergast’s summation of his experience is stark. “Covid lulls you into a false sense of security, that you’re okay now, and then it will come back,” he reflects. “This is the modus operandi of the virus: it will come and go in waves.” One can only hope this doesn’t prove a prophetic statement about coronavirus in general.

Radio Moment of the Week: McKean’s memories of Ireland ’90

On Tuesday Newstalk’s peerless roving reporter, Henry McKean, harks back 30 years with Tom Dunne, guest host of Sean Moncrieff’s afternoon slot, as he shares his memories of first moving to Ireland. It’s a typically good-natured yet incisive item, as McKean evokes the era by interviewing, ahem, the former DJ Dusty Rhodes as well as his own mother, Rosemary. (“What a beautiful voice,” says the ever-chivalrous Dunne.) But it’s the personal reminiscences that stand out, from Dunne’s gleeful snapshots of singing stardom with Something Happens to McKean’s account of being the Scottish new boy in an Irish school. “I got a hard time. I wouldn’t say bullied, but I stood out,” he says, as he recalls being labelled “Haggis” and getting into fights. Dunne sounds genuinely upset. “I’ll call a spade a spade: that’s not a great start.” Luckily for Irish radio, McKean stuck it out.