Terence MacSwiney and the hunger strike that made world headlines 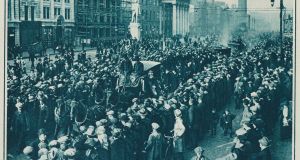 When news of Terence MacSwiney’s death after 74 days on hunger strike at Brixton Prison reached Spain in October, 1920, the people of Catalonia went into full mourning. Women in the region were invited to wear crepe and black ribbons, flags were hung at half-mast, and 500 protesters arrived at the British Consulate-General in Barcelona. They were waving a Sinn Féin flag, chanting “Viva Irlanda, muera Inglaterrra” and demanding to see the man in charge.

The consul-general was out at the time and when staff told them to lodge their complaint in writing, the demonstrators left. About 10 minutes later, the stoning of the building commenced. While workers inside tried in vain to get the shutters up, the crowd flung anything they could lay their hands on and broke every window in the place. In Ireland’s struggle for independence from London, and MacSwiney’s willingness to die for that cause, the denizens of Barcelona apparently saw their own quest to break from the control of Madrid.

The Catalans were not alone in becoming absorbed in the daily drama of the lord mayor of Cork’s protracted, slow dance with death.

Once the British government transferred him from Victoria Barracks in his hometown to an English jail back in August, every foreign correspondent in London started to report the details of his case.

MacSwiney was elected lord mayor of Cork back in March following the assassination of Tomás MacCurtain, his predecessor and close friend, by the Royal Irish Constabulary.

Yesterday he was unknown outside Ireland. Today the whole world is familiar with his name - Madrid's El Sol

MacSwiney was arrested by the 2nd Hampshires at City Hall and refused food even before being formally charged with possession of a number of documents, including a numerical cipher belonging to the RIC and his own inauguration speech.

When a military tribunal sentenced him to two years without hard labour, he responded, “I have decided the term of my imprisonment. Whatever your government may do, I shall be free, alive or dead, within a month.”

The calibre of quote that quickly turned a local squabble into international front-page news, creating a very modern media moment with people all across the globe suddenly consumed by each fresh quotidian bulletin about this indomitable character’s diminishing weight, his inexorable deterioration.

“Yesterday he was unknown outside Ireland, ” wrote Madrid’s El Sol in a profile of MacSwiney. “Today the whole world is familiar with his name.”

In New York, a group of Irish-American actresses led by Eileen Curran blagged their way on to the docks and persuaded 2,000 longshoremen (including a huge number of African-Americans) to down tools and to stop unloading ships in what the city’s newspapers dubbed “The Irish Patriotic Strike”. After briefly creating havoc for the Cunard and Red Star lines, and causing copycat protests to break out on the waterfronts of Boston and New Jersey, the women sent a cable to Lloyd George in Downing Street.

“The sound of death in the throat of Terence MacSwiney is the death knell of your adventure in Ireland,” they warned. “We hear the bells tolling. The people are gathering. Oil your tanks, polish up your guns.”

Elsewhere in the city, the final session of the first United Negro Improvement Association convention in Harlem, Marcus Garvey, the famed black nationalist leader who thought Irish republicans offered a great example to his own people, told his followers he’d sent a telegram to Fr Dominic O’Connor (MacSwiney’s prison chaplain). It read: “Convey to McSwiney [sic] sympathy of 400,000,000 Negroes.” All this before the hunger strike had finished its third week.

The South Australian Labour Congress passed a resolution protesting his imprisonment and urging immediate release “in the interests of humanity and justice”. In Rome, Benito Mussolini described the hunger strike as “Uno stoicismso superbo”, even as Irish clerics at the Vatican campaigned feverishly and, ultimately in vain, to get Pope Benedict XV to speak out on MacSwiney’s behalf.

Down in Buenos Aires, an expatriate organisation called Circulo Irlandez (Irish Circle) planned a more violent show of support, getting caught plotting to blow up the Edifico Britanico, a building occupied by the British Legation, the Royal Wheat Commission, and the Royal Mail.

In Paris, such was the demand for information that one theatre actually issued updates about MacSwiney’s physical condition in between acts each night. The French press coverage of events in Brixton was so forensic that James Joyce sat down at his flat on rue du Cardinal Lemoine to write a postcard to his brother Stanislaus in Trieste and on it scribbled a poem containing this couplet.

Of spinach and gammon

Bull’s full to the crupper,

Are the mayor of Cork’s supper

That MacSwiney endured so long ensured the outpouring upon his eventual demise was inevitably seismic. On October 31st, 1920, 40,000 people filed into the Polo Grounds, a baseball field that was then New York’s largest open-air stadium, to hear Éamon de Valera speak on MacSwiney’s death. An estimated 10,000 more were stranded outside as the city’s Irish community gathered to mourn his passing, and to vent 2½ months of pent-up anger and rage. When de Valera took to the stage, three turbaned Hindus sprinted across the outfield, carrying a tricolour and the flag of Indian independence. They mounted the platform and draped both emblems over his shoulders in a gesture that sent the crowd into a frenzy and caused a band to strike up Amhrán na bhFiann.

Half a world away, in Manchester, 40,000 marchers came onto the streets of the city for a mock funeral on a cold Sunday in Lancashire. Having met up at Stevenson Square, they walked to Moston Cemetery in a cavalcade boasting 60 taxi-cabs and carriages, and a hearse containing an empty coffin draped in the Irish flag. At one point that afternoon, a small group of “Orange” protesters, believing they could snatch MacSwiney’s body, tried and failed to disrupt the procession.

Similar obsequies for empty caskets were held in Melbourne, Bradford, Newcastle, Boston, and Philadelphia. For the “funeral” in Chicago, the crowd of mourners was estimated to be in excess of 50,000 and soon after his death, he was uniquely commemorated at the city’s Old St Patrick’s Church on West Adams Street, a place of worship originally built by Famine-era emigrants from Ireland.

When Thomas A O’Shaughnessy fashioned a triptych of stained-glass windows for the chapel, the installation titled “Faith, Hope & Charity” immediately became known as the Terence MacSwiney Memorial. In a city he’d never visited, in a country he’d never seen, it stands there still.

There is no question MacSwiney’s incredible feat of endurance and the drawn-out circumstances of his death magnified the cause of Irish independence in the international arena.

In outposts all over the world, concerned British diplomats sent back to London clippings of pro-Irish newspaper articles and accounts of events like the Indian Nationalist Congress in Nagpur adopting a resolution paying homage to the deceased lord mayor.

The civil servants wanted to convey to their superiors how unpopular the decision to allow him to die in prison had been. They knew well that in losing his battle, MacSwiney and Ireland had won the propaganda war.

Dave Hannigan is the author of Terence MacSwiney: The Hunger Strike that Rocked an Empire (O’Brien Press)