Sole survivors get heeled: The best theatre of the week 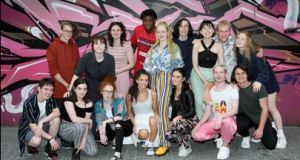 National Youth Theatre’s Ask Too Much of Me

Ten years ago, the writer, spoken-word artist and occasional actor Dylan Coburn Gray made his National Theatre debut on the stage of the Peacock Theatre in an imaginative and off-the-wall production of The Seagull, directed by Wayne Jordan. It was an auspicious debut for a member of Dublin Youth Theatre, selected to appear in the annual production from the National Youth Theatre, an umbrella association for youth theatres across the land that convenes an ensemble from their talent pool. In the space of just a decade, Coburn Gray saw his Abbey stage debut as a writer with Citysong.

Now he collaborates with another National Youth Theatre alumnus – the writer, director and occasional actor Veronica Coburn, who appeared in the company’s 1984 production. It’s not the first time the mother-and-son team have collaborated on youth theatre: in 2017 they collaborated on This Is a Room . . ., a response to straitened circumstances for young people today for DYT. Here they turn to matters of faith, if not quite God, by following 16 young people living outside the law during the turbulent first half of 2018, where questions abound but answers are harder to find. If the experience of its makers is anything to go by, NYT itself can be more instructive, opening up avenues into theatre for new generations. Is that too much to ask?

Even if you know nothing about the Broadway sensation Kinky Boots, which has been conquering the world with its ebullience since 2013, the names of its creators should be enough to hold your interest. Music by Cyndi Lauper. Book by Harvey Fierstein. Still, it’s not quite their creation. Based on the 2005 British film, itself inspired by a BBC documentary on cheeringly true events, the musical follows the scion of a failing shoe factory, Charlie, who forms an unlikely partnership with a drag queen named Lola to produce a new line of high-heeled fetish footwear for men. That might sound like a niche industry, but it was enough to save the company, and the growing audience for the musical – initially received tepidly, but whose audience response grew higher and higher – suggests a still bigger following for stories of ineffably fabulous triumph.

The plot is more off-the-shelf than made-to-order: uncertain conservatives meet a troupe of flamboyant drag queens and discover how to realise their passions, raise their spirits and learn to love themselves and each other. It’s not so much the story, then, as the way they tell it: with the sparkly, emotive pop of Lauper’s music, the brass of Fierstein’s script and the stage-splitting exuberance of some reliably outré and vertiginous costumery. Like the boots in question, that success isn’t so hard to manufacture: Girls will always wanna have fun, drag is a now a firmly mainstream staple, and everyone likes the excuse to kick up their heels.