With two new plays opening simultaneously in Dublin and London, the playwright lays bare both a family and a political drama, full of art and ambiguity 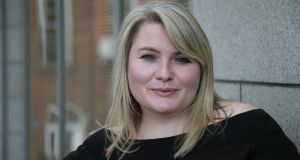 In a home that doubles as an artist’s studio, on an island off the coast of west Cork, a newcomer inspects a recently revealed abstract painting and offers her impromptu appreciation.

“You can see the female rage,” she begins. She doesn’t stop there. Here she sees images of menstrual blood, childbirth, abortion – “pretty much all female suffering” – but also the female drive for intimacy, desire and explosive release. Its creator, a celebrated artist of no small notoriety, nods at this gushing encomium and finally replies, “It’s a blood orange.”

So begins Nancy Harris’s fiendishly sharp play for Druid Theatre Company, co-produced by the Gate Theatre, a drama that moves with the pulse of a murder mystery through teasing questions about family secrets, art and ambiguity. “I see so much more,” the jejune critic says, rather hopefully, having married into a family where everyone struggles with what to conceal and reveal.

By happy coincidence, it will soon be possible to see so much more of Harris’s work, who premieres two new plays in two capital cities in two successive weeks. A few days before The Beacon opens in Dublin, directed by Gary Hynes, Harris’s play Two Ladies will have had its premiere at London’s Bridge Theatre, directed by Nicholas Hytner and starring Zoë Wanamaker and Zrinka Cvitešic.

Attending rehearsals for The Beacon the other week, where Hynes and her cast treaded carefully through one scene involving a rattling discovery, and its central thorny mother-son relationship between Jane Brennan’s aloof artist Beiv and Marty Rea’s tormented exile Colm came clearly into view, Harris’s attentions hardly seemed divided.

If anything, she seemed fascinated to see what the scene was laying bare. Writing The Beacon had taken her a painstaking two years, at one point scrapping an earlier play she had begun under Druid’s commission, but there was still much to discover in it. “If you knew everything, you would calcify it,” she told me later, alive to whatever the cast found in it. “I think it’s a good thing for us to try and meet in the middle somewhere.”

As the scene repeated, Rea momentarily lost his grip of one of Beiv’s sculptures – a human skull. As it tumbled to the floor, the top of its cranium popped off, like a lid from a jar, allowing everyone to see inside. The rehearsal paused for a slightly embarrassed, dark chuckle. “I actually lost the head there,” Rea quipped and the scene immediately resumed.

Harris’s play began with an idea of more voluntary exposure: someone suspected of murder who decides to build a glass box around themselves. That is certainly true of the enigmatic Beiv, whose husband disappeared at sea 10 years earlier, in suspicious circumstance, and who is refurbishing their holiday home as a kind of goading display case, replete with taunting skull sculptures. “What would happen if you said, Ok, I’m going to put myself entirely on display to the world?” Harris remembers thinking.

To some extent, that is what artists do anyway, whether writing a play or painting a blood orange. “I do think the unconscious is the most interesting thing,” Harris agrees. “Visual artists are never trying to explain themselves. And it’s weirdly similar for the theatre.” And yet she will find herself, in the audience for one of her works with her finance, for example, asking, mystified, “Where did that come from: That darkness and that rage? I don’t know that side of you.”

That can be hard to square with Harris, who first came to prominence in 2011 with No Romance, followed quickly with the success of Our New Girl for London’s Bush Theatre; an award-winning writer considered and in control of The plotting of The Beacon, for instance, is particularly taut. Hynes remembers reading it in one sitting before committing to its staging: “It felt grown up,” Hynes tells me. “It had structure. It had four or five stories running at the same time, banging off each other, but kept in balance.”

Yet Harris does not consciously work through her structures. “What I do is character work,” she says. “I sit with the characters for ages and images. Because images are what excite me the most.” Images are also wide open for interpretation and projection: A blood orange. A glass box. A skull in West Cork.

“I always think an artist shouldn’t be fully in control,” she says. “Because I feel we’re not in our lives… You should be afraid of what you reveal. Because that’s when you’ve really hit the truth, I think, of yourself. You have to allow yourself to go there and be willing to reveal that thing you didn’t mean to. I feel like that’s the art I’m interested in. Where you go beyond your narrative that you’re trying to spin to the world or yourself.”

The Beacon lands close to home. As a child Harris lived with her family for a year in West Cork, holidaying there frequently, returning to work during her summers, and still visiting regularly. “I think those things get lodged in your imaginative landscape,” she says. That her play involves what appears to be a long-unsolved murder, with a widely known and deliberately provoking suspect, who becomes the subject of a popular true-crime podcast, nudges firmly in the direction of the Sophie du Plantier murder, recently revisited by the podcast West Cork.

The similarity is only glancing: Harris’s play was written before the podcast debuted and, although a fan of the genre, she avoided listening to it. “I didn’t want the Sophie du Plantier murder in my head.” Her fascination was more the true-crime podcast form itself, such as the popular Serial, which tried to bring certainty to lingering ambiguities, and seldom do. Harris liked the similarity to our personal searches for the elusive truths. “Because we’re never solved either,” she says.

Based for several years now in London, where she has written for stage, musicals, children’s theatre and television, Harris returns to Ireland regularly, watching the national culture and the theatre culture change incrementally, as though viewed through time-lapse photography. “Plays are kind of cool now,” she remarks, “which they really, really weren’t when I was in Ireland. There was no interest.”

Selina Cartmell, whose debut season as the Gate Theatre’s artistic director featured Harris’s adaptation of The Red Shoes, has been a steady champion: “[Nancy] writes with a razor sharp wit and a subversive, deeply psychological insight into fractured relationships,” says Cartmell. “She subtly provokes us with a dark undercurrent that asks us to lean in closer and to think deep and feel hard.”

Proud as she is to have two consecutive openings, directed by two respective Tony Award winners, Harris is frank about the challenges of a writing career. After the last high water mark of her career, with No Romance and Our New Girl, “there was a long gap”. She recalls, with some alarm, working as a script reader for a London theatre and receiving unsolicited plays from quite established writers, then drifting out of fashion. “I’m not sure things are a meritocracy any more,” she says. “What actually gets a play on is an artistic director wanting to do that play.”

Encouragingly, Harris is using her opportunities and breaking new ground. Two Ladies, for instance, an imagined meeting between Brigitte Macron and Melania Trump (with, I’d wager, much more to say), will be her first play not to feature any Irish voices. (The Beacon – mordant, dark and sometimes laceratingly funny – is hard to imagine in any voice other than Irish, she agrees.)

“What is your voice?” Harris asks at one point. “Is it the place you’re from, or the subject you tackle?” On the evidence of her two plays, it can be both, as discreet but perceptible as the impressionistic splotches on a canvas. “We don’t want to be afraid of what’s under there,” Harris says, before returning to see what else rehearsals may dredge up, “but you just don’t know what’s going to come to the surface. That’s the thing.”

Radical Wordsworth: Focusing on the ‘spots of time’ of poet’s greatest work
7

Bernadette Kiely evokes an isolation that has become routine
9