What happened when Fleabag and, briefly, the Hot Priest came to a Dublin cinema? 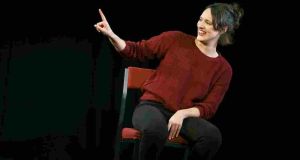 On Thursday evening, a long queue had formed outside Cinema 1 in the foyer of the Irish Film Institute. People weren’t lining up to attend a film premiere or to see a distinguished luminary speak. Rather they were here to see Phoebe Waller-Bridge’s Fleabag broadcast live from the West End.

The one-woman show originally debuted at the Edinburgh Fringe Festival in 2013 and subsequently inspired the award-winning television series of the same name. With the success of the television series came a renewed interest in its source material. As such, Waller-Bridge has been busy performing it to sold-out crowds this year.

Phoebe Waller-Bridge is an immensely talented actor, capable of both hilarious physical comedy and moments of desperate poignancy

In March, she took the show to New York and it quickly became the hottest ticket in town with the likes of Anna Wintour, Chris Rock, and Adam Driver among the notable attendees. When she announced she was bringing the show to London for one final outing, fans clamoured to secure tickets and the run quickly sold out. Just this week, Charlize Theron tweeted, “I really don’t understand how someone can be this talented and hilarious. Proud of you, friend!”

That’s when National Theatre Live intervened. In August, it was announced that the play would be broadcast live into cinemas around the world for one night only. Many cinemas were forced to put on multiple screenings to satisfy demand.

In the Irish Film Institute, punters queued patiently and armed themselves with miniature plastic cups of red wine. This writer didn’t spot any tins of gin but that’s not to say some wily attendees didn’t sneak them in. Once admitted, they took their seats and were treated to a long stream of advertisements promoting forthcoming National Theatre Live productions. At one point, Andrew Scott popped up in an ad for Noel Coward’s Present Laughter. The mere sight of the Hot Priest, as he is now known, elicited oohs and aahs as though the crowd were at a Chippendales show.

I really don’t understand how someone can be this talented and hilarious. Proud of you, friend! #Fleabag pic.twitter.com/SceAkdo1QZ

Phoebe Waller-Bridge is the Simone Biles of emotions; the way she can flip them in a millisecond in such a graceful and beautiful way is stunning. #Fleabag @NationalTheatre This was claaasss pic.twitter.com/rvxdqB33iX

Eventually, viewers were given a glimpse inside Wyndham’s Theatre in London as the camera panned around the live audience and gave a sense of the atmosphere brewing in the theatre. One couldn’t help but feel for the audience members whose images were being beamed across the world - what if the cameras caught them picking their nose or rummaging through their ears?

Soon the camera focused on the lone red chair sitting on stage, the only prop in an otherwise sparse production. The lights went down and a hush descended over the crowd. Phoebe Waller-Bridge darted out onto the stage sporting a simple costume comprised of a burgundy jumper, black jeans, and loafers. It was Fleabag time, baby.

First things first, Phoebe Waller-Bridge is an immensely talented actor, capable of both hilarious physical comedy and moments of desperate poignancy. It can be easy to forget this when so much of the discourse around her focuses on her writing but it was nigh on impossible to ignore in this intimate setting.

Whether she was impersonating her pet guinea pig having a serious bop to The Mother We Share by Chvrches or pursing her lips to embody a would-be paramour nicknamed Tube Rodent, she had the audience in fits of laughter. Likewise, you could hear a pin drop as we witnessed her proposition a customer in her café. As the broadcaster Muireann O’Connell put it: “Phoebe Waller-Bridge is the Simone Biles of emotions.”

Unsurprisingly, the writing is razor-sharp and darkly funny. The monologue is peppered with perfect turns of phrase (see: when she refers to her sister’s PMS as her “monthly confidence crisis”) and other jokes that teeter on the edge of respectability.

It’s a testament to how beloved Fleabag is that thousands of people forked over money to attend a live screening of a play in a cinema. There are even encore cinema screenings scheduled for those who couldn’t score tickets to the live screening. As the curtain fell, there was a certain sadness in realising this was likely the final outing for Fleabag. (Unless Phoebe Waller-Bridge finds herself tempted by Amazon’s deep pockets, that is.) We may not see the likes of it again, but at least we got to experience it one last time. Nice one, Phoebe.