Moop review: Neon-popped and quirky celebration of the possibilities of play 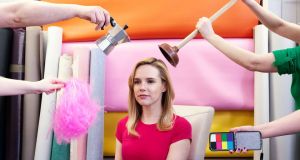 MOOP: the performance creates a universe where anyone would be delighted to live. Photograph: Aoife Herrity

Black Box, Smock Alley Theatre
★★★★☆
Moop is an acronym for Matter Out of Place. In the case of Game Theory’s playful performance for an all-ages audience, this matter is a series of objects that the ensemble of five encounter, as if for the first time, with hilarious results. Bowler hats offer the opportunity for a quirky choreographic exchange, inflatable water wings provide the inspiration for a bonkers ballet, and a stick frustrates the actors with its steadfast stickiness. Moop is not about the transformation of “stuff”, but about the inherent joy in celebrating its materiality. Director Cathal McGuire gets the flow of action just right, although the actors – whose po-faced seriousness make their actions even more funny – haven’t quite nailed the timing. Alex Herring’s neon-popped design gently suggests another universe where the possibilities of play are endless. It’s the kind of universe where anyone, adult or child, would be delighted to live, but 35 minutes will do nicely too.