Peter Andre: ‘I’d love to be in Peaky Blinders. Or Line of Duty’

Once a walking set of oiled abs, Andre now has his sights set on his original love: acting 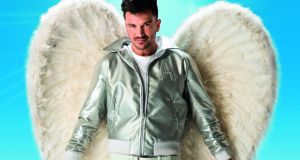 Nice guys finish first, seemingly. When Peter Andre had emergency surgery on his kidneys in 2010, he sent tickets to a live show to his surgeon, Ruaraidh MacDonagh, by way of thanks. The surgeon couldn’t make the show, but passed the tickets on to his 19-year-old trainee doctor daughter Emily. Nine years later, Emily is married to Andre, and they have two children (Millie, 5 and Theo, 2).

Bit weird that your father-in-law has seen your kidneys, I offer. “[He’s seen] more than that,” Andre laughs. “My joke at the wedding was that if he knew then what he knows now, he would have done a different operation because he was in the right area.”

Everyone in the MacDonagh-Andre clan gets along famously. Andre and Emily had a sweetly chaste courtship, springing from a friendship. When Andre told Ruaraidh (of Donegal descent) that he had feelings for his daughter, 17 years his junior, the surgeon’s response was: “don’t you think I’ve known that you two are right for each other?”

Yet at the time, rumours were rife that Emily’s parents were horrified that their daughter was about to hitch herself to the celebrity circus surrounding Andre. He “understands” the rumours, though dismisses them out of hand: “Her mum and dad has one request – that she finished her medical training, and I said to them, ‘there’s nothing I want more than for her to be an incredible doctor’. Now she’s flying it. Doing long hours, but really moving up and is a real life-saver.

It’s not just the love of a good (and medically qualified) woman that prompts Andre to say variants of, “I’m the happiest I’ve ever been” many times during our interview. The man positively radiates niceness and earnestness. He’s a hugger. He likes to be liked: he met George Michael once and was starstruck into muteness, and winces now, thinking that he might have come across as arrogant.

Only one pre-interview caveat has been issued; that Andre not be asked any questions about his ex-wife Katie Price. The pair met in 2004 on I’m a Celebrity... Get Me Out of Here!, married in the megawatt glare of the limelight, had two children (Junior, 14, and Princess Tiaamii. 12), and lived out much of their marriage via an ITV reality series.

It’s reasonable enough that Andre would rather side-swerve chat about Price’s eventful year, which includes multiple plastic surgeries, a broken engagement, alleged financial difficulties, a driving ban, and parental custody battles with another ex-husband, Keiran Hayler. For his part, Andre says simply that he has promised his two older children that he won’t talk publicly of their mother.

Andre is still very grateful that reality TV gave his career a second wind: before 2004, he was known primarily as a walking set of oiled abs that released the 1990s hit Mysterious Girl. For that reason, after giving so much of his personal life up for public consumption, he says he would never play the privacy card.

“I could never be the person that goes, ‘right I want to be private’, because I think it would be wrong,” he notes. “If you do that you’re almost making a mockery of the people that have supported you being so open.

“So much came out of [reality TV]. People got to see you as a family, got to meet your mum and dad, got to know your kids’ behaviour. But I’ve just moved on from it. I’m just slowly, slowly, moving in other directions.”

At 47, he is more bright of eye and bushy of tail than men half his age, which is probably why, five years ago, he was offered the role of high-schooler Danny Zuko in the touring production of Grease: The Musical. He turned down the part, citing commitment to his family and a 25th-anniversary tour, but producers then offered him the role of Teen Angel; one he shares with fellow pop veteran Samantha Mumba.

“When they told me about the role, I said, ‘but that’s the bit in the film I always fast-forward’,” he laughs. “But Colin Richmond, the designer, was like, ‘the whole show leads up to that point’. It’s actually a brilliant part – it’s made me wish I was doing more dates.”

It’s the first time, save for two one-off charity appearances, that Andre has been involved with a touring musical since he was a teenager in Australia. He hugely enjoys his current role, but his move into theatre is part of an overall career pivot.

Andre is evidently returning to a love of acting, and doing what he would have done had pop music and later, reality TV, not have happened first. Recently, he made his acting debut in a The Inheritance, a short film by director James Hickox in which he plays an ex-heroin addict. He received a Best Actor nomination at the North Hollywood Film Festival.

“I knew I wanted to do this, but I know I’m not going to be some big actor overnight – this is going to take years,” he notes. “Hickox said, ‘if you come across nice, it won’t work’.”

He went a bit “method” to play Harry, a man in turmoil: “I didn’t sleep for three days in the lead up to filming. I said, ‘I’m not going to change out of my clothes, I’m going to smell’ and I felt skank, but it really helped.”

He’d love to do something more serious, he enthuses. Like Peaky Blinders? “You know what else I love? Line of Duty,” he swoons. “I want to start auditioning for things, but it’s going to take time. Whatever happens, I’m focused on it now.”

He’s got a full dance card, whatever comes next: in addition to Grease and occasional presenting stints on ITV’s Lorraine, voiceovers for Thomas the Tank Engine, public speaking, designing beds for HOS Home, coffee (he has a fleet of concessions at UK music festivals), property rentals across Cyprus, the UK and Australia.

Much of his impetus to stay busy, he notes, comes from his dad: “I remember him saying, ‘always provide for you family’,” he notes. “When you first start out in this industry, you just want to be known. I‘m hopefully getting to the point where you fully set [my kids] up, because that’s what it’s about.”

Surmising a career full of ups and downs, he adds: “Most people start in clubs then go to stadiums, but I started in stadiums and now I’m doing theatres. But I’m so happy.”

Grease: The Musical is on at the Bord Gáis Energy Theatre, Dublin from September 17th-28th. More information from bordgaisenergytheatre.ie