Dublin Fringe Festival: Much to enjoy in this ambitious production, which merges ancient myth with modern life 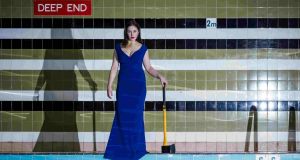 O’Reilly Theatre, Belvedere College
★★★☆☆
Created by Danielle Galligan and Gavin Kostick, Gym Swim Party merges ancient myth with modern life, enacting an epic battle on a contemporary stage. The warring factions are two rival gyms – two families pitted against each other, until two enemy tribe members fall in love. Co-directed by Eddie Kay, Louise Lowe and Megan Kennedy, there is much to enjoy about the slick and ambitious production: clever sequences of choreography that marry elegance and exercise; Maree Kearns’ resourceful swimming pool set; Denis Clohessey’s sinister sound design; and, crucially, John Doran’s marvellous mischievous Messenger figure, Lug, who helps to bring (some) clarity to the muddled storyline and elusive characters. The classically educated viewer might enjoy trying to pin the plot down, but even Greek scholars will struggle with the overall thrust of the drama, which manages to be both thin and opaque. The prophetess Cass (Kate Gilmore) may know what’s going on before it happens, but we have no idea.

Runs as part of the Dublin Fringe Festival until Sunday, September 15th