Symphony of Worms review: Fantasy and confession overlap in a lyrical solo show 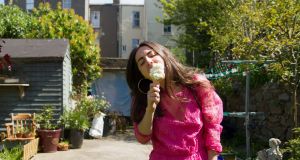 Boys’ School, Smock Alley Theatre
★★★★☆
Death comes in many forms in Hannah Mamalis’s new solo show, where fantasy and confession overlap. A life-size blow-up doll becomes an alternative self, both more expendable and more robust than our narrator. Telling her own story of growing up as an only child in Connemara, inventing playmates, Mamalis delves into what lies behind her impulse to perform.  In an elastically hybrid form, only slightly less absurd than her previous Fringe show, The Egg is a Lonely Hunter, Mamalis moves lightly from stand-up comedy to storytelling and improvisation. Her initially ironic script becomes increasingly lyrical as she explores her fear of death, both her own and other people’s. A botched magician’s trick involving a pigeon, some terrible sex and a somewhat predictable drunken karaoke turn at the office party, lead us into more serious terrain. Beyond the charm and utter ease of this performance is a revelation of vulnerability, a surprise emotional kick.

Runs at the Dublin Fringe Festival until Sunday, September 15th