Gate Theatre: Number of women directors up from 8% to 80% 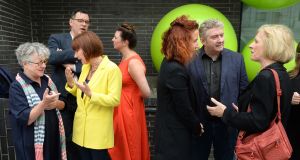 The Minister for Culture Josepha Madigan with Garry Hynes, Druid Theatre at the launch of the gender policies of 10 Irish theatre organisations. Photograph: Dara Mac Dónaill / The Irish Times

The Gate Theatre has made dramatic strides in increasing the number of women employed over the past two years, according to a gender equality report into Irish theatre.

The number of women directing plays at the world-famous theatre is up from 8 per cent between 2006 and 2015 to 80 per cent in the last 18 months, according to a benchmarking analysis carried out by the theatre.

The changing numbers were sparked by a campaign led by the Waking The Feminists (WTF) lobby group, representing all strands in theatre. They also come on foot of changes in the Gate’s leadership, following the appointment of artistic director Selina Cartmell and executive director Bea Kelleher.

Allegations of inappropriate behaviour and sexual harassment against former Gate Theatre artistic director Michael Colgan – claims he has denied – came to light last year, after he retired from the theatre following 33 years at the helm.

The figures are indicative of progress seen in Gender Equality in Practice in Irish Theatre – the gender equality policies of 10 arts organisations – which was launched Minister of Culture, Heritage and the Gaeltacht Josepha Madigan at the Lir academy of dramatic art, Dublin, yesterday. The policy shifts have been led by theatre companies in response to the Waking the Feminists movement and the research project Gender Counts.

A working group of 10 theatre companies – the Abbey Theatre, Cork Midsummer Festival, Corn Exchange, Druid Theatre, Everyman, Dublin Theatre Festival, Fishamble, the Gate, The Lir Academy and Rough Magic – collaborated to share expertise, support and learnings, and enhance the possibilities for women in the sector. The companies committed to gender equality in structures and employment, and in the creative work they produce, and set out how they are working to achieve it.

In November 2016 some Arts Council-supported organisations stepped up to lead the way on gender equality.

Some 18 months later Everyman Theatre artistic director Julie Kelleher outlined the progress: detailed gender equality policies and targets from each organisation, which can “be shared more broadly across the sector as potential templates for others to follow”.

Lir director Loughlin Deegan said the initiative was acting to “ensure the future health and vitality of Irish theatre production. Irish theatre has been in the spotlight for the past two years, and perhaps in the dock to some extent. It’s been a particularly invigorating and challenging couple of years”. He said: “We haven’t given ourselves the credit for being front riders in this social change. Waking The Feminists captured the zeitgeist.”

Many companies have made gender equality a key board priority and responsibility.

Dr Brenda Donohue, the lead researcher on Gender Counts: An Analysis of Gender in Irish Theatre 2006-2015, which underpins the policies, said “the tracking of female participation through statistics strips away the layers of familiarity, unconscious bias, routine, and everyday pressures that accumulate, and which sometimes mask the reality of the composition of the theatrical workforce”.