Copper Face Jacks: The Musical – It’s West Side Story with the Irish national anthem at the end 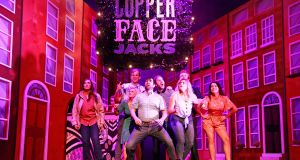 The cast during rehearsals of Paul Howard’s ‘Copper Face Jacks’ in the Olympia, Dublin. Photograph: Nick Bradshaw for the Irish Times

In the Olympia Theatre on a set designed to look like Harcourt Street, dancing, drinking, staggering and flirting young people are singing, “Whoops, I’m back, in Copper Face Jacks.” In a world in which adding the words “the musical” to random nouns has become commonplace, it’s surprising that it took Paul Howard so long to train his wise comic eye on the beloved Dublin nightclub.

He has previously chronicled other significant Irish institutions. There was Anglo: The Musical, for example, which was besieged by solicitors’ letters and blighted by legally necessary, last-minute rewrites. “It nearly killed me,” says Howard.

Amid the chaos of that production, co-producer Darren Smith said, wearily, “We should have just done Copper Face Jacks: The Musical.”

“And we looked at each other,” says Howard, “and said, ‘Actually that’s a good idea.’”

Copper Face Jacks: The Musical tells the story of Noeleen (Roseanna Purcell), a young Kerry woman who follows her dream of coming to Dublin to work in the VHI claims department (“There’s a song called VHI that’s an absolutely heartbreaking lament”).

She is lured to the door of Coppers one night by the “waft of Maniac 2000” much like, says Howard, one of the Bisto Kids. There she falls in love with a Dubliner named Gino (Love/Hate’s Johnny Ward). It is an across-the-divides culchie/jackeen romance that Howard likens to “West Side Story with slow dances and carvery and with the national anthem at the end.”

Copper Face Jacks’ proprietor, Cathal Jackson, was cautious initially but was ultimately convinced by Howard that the humour would be affectionate. Today there are two young Copper Face Jacks PR people present and Smith introduces them as being “more powerful than the Government.”

The team are striving for authenticity. Director Karl Harpur consulted the Coppers DJ about their setlist. Choreographer Debbie Kiernan’s biggest challenge was teaching the talented actors to dance convincingly badly. “They were just too good,” says Howard.

Everyone on the team has had their own Copper Face Jacks experiences. Howard was present the night Mark Kennedy and Phil Babb engaged in a “Starsky and Hutch impression” on the bonnet of a car and were arrested prior to a World Cup qualifier.

Johnny Ward recalls a formative moment when an attractive Coppers’ patron put her chewing gum in his ear.

Roseanna Purcell describes how a friend fell down the stairs there once without hurting herself or dropping the drinks she was carrying.

“I have friends from Thurles, ” says Purcell, “who still won’t go anywhere else when they come to Dublin.’”

This is surprising to Ward. “Nobody plans to go to Coppers,” he says.

Howard depicts Coppers as a utopian melting pot where people of all classes, creeds and county colours can go to get “the shift”. “It’s like a big hug from home.”

He claims he’s too old for Coppers now but Purcell isn’t so sure. “I reckon he’s been there many times in disguise.”

Coppers is uniquely Irish, says Smith. “Irish culture is similar to British culture but there’s a 10 per cent difference. And that’s the important 10 per cent. We love it when Hollywood stars know what crisps we eat.”

Everyone has an opinion about it, says Smith. “I was having a drink with Dustin the Turkey and Louis Walsh when Bono sent over a bottle of champagne and joined us.” He pauses. “I know it sounds like the beginning of a bad joke, but this really happened.” Bono was very excited by the Coppers idea, Smith says, and had ideas of his own. He suggested putting bouncers outside the venue barring people from entry. “I said I’d do that if they could be seen barring him.”

There’s a relaxed atmosphere in the cool theatre. It’s nice, says Howard, to be doing a musical that doesn’t involve “the threat of going to jail for contempt of court and losing our houses.”

The only legal letter they’ve received this time around was one from the Paris nightclub, Moulin Rouge, after Howard likened the show to “Moulin Rouge with slow sets.” “It was the nicest solicitor’s letter I’ve got in my life,” he says (Smith shows it to me and it’s remarkably polite).

How else does it differ from Anglo: The Musical? “People have to leave a musical feeling better than they did when arrived,” says Howard. “That’s the golden rule. . . With Anglo they felt utterly miserable. We’d reminded them of how screwed the country was. If anything, with this, I want people to feel like they’ve had a night in Copper Face Jacks.”

Copper Face Jacks: The Musical runs from the 5th of July. Tickets available from Ticketmaster.ie.

The Music Quiz: What is Neil Young’s sole No 1 single in half a century?