‘My hair colour has to change for people to accept me’

Broadway star Kelli O’Hara on women in theatre, the pay gap, and returning to ‘The King and I’ 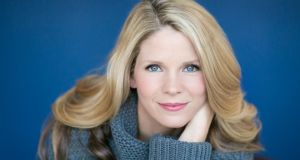 Broadway bar: “The minute I turned a little too old to play the ingenue I never played a blonde again,” Kelli O’Hara says

The last time Kelli O’Hara put on Anna’s magnificent silk gowns, for the Broadway production of the Rodgers and Hammerstein musical The King and I, it won her the Tony award that was threatening to come for much of her 20-year theatre career.

So it’s a treat that she’s reprising the role closer to us, in London, and that she’s once again starring alongside Ken Watanabe, the Oscar-nominated star of The Last Samurai. In the musical he plays the king of Siam, in 1860s Bangkok, who employs Anna Leonowens to teach his children and wives English, while he’s caught in a culture clash as British imperialist forces threaten his reign. The friction between the king and the headstrong Anna makes it an electric pairing – “Sex has entered the building,” the New York Times said of their first dance.

“Ken’s a beautiful person. I’ve never seen anyone so invested in their role, and I think that’s very important in the way that I like to work,” O’Hara says in her dressingroom during rehearsals. “He’s a very generous person, too. Every day he’ll ask me how I am. If I’m not feeling well he’ll make me a rice bowl which has proteins in it, or make me tea. He’s funny, he’s inclusive. I’m so happy to be back with him. I missed him.”

If only my grandparents were alive. There’s lots of generations of Patrick O’Haras to try and make proud

O’Hara’s performances at the London Palladium – a theatre large enough to do justice to classics like Getting to Know You, Hello, Young Lovers, and I Whistle a Happy Tune – are her first in the city. In 2011 she missed the transfer of South Pacific, directed by her regular collaborator Bartlett Sher, as she had just had her first child.

“It’s been a dream of mine to work in the West End. I’m so excited about it,” she says. And she’s not too perturbed by having to do a British accent for a British audience, as “the human nature of Anna is universal. I’m just a vessel for that, and I’m going to do the best I can,” she says. “So I’m looking forward to London. I haven’t travelled as much as I’ve wanted. I work instead, which has been a great joy for me, but it’s kept me from that privilege.”

Indeed, her schedule means she has not yet investigated her roots in Ireland. After her great-great-grandparents left Co Clare, at the end of the 19th century, their sons acquired a farm in Oklahoma, and six generations of O’Hara farmers have lived there since.

“There’s a pride to know where you’re from,” says O’Hara, whose husband Greg Naughton (of The Sweet Remains), is also of Irish heritage. “It’s a badge of honour for me. I was inducted into the Irish America Hall of Fame this year, and I’m very proud of that. If only my grandparents were alive. Their sacrifices are what allowed me to try to work in the entertainment industry, which is something they would never have considered. There’s lots of generations of Patrick O’Haras to try to make proud.”

Kelli O’Hara’s journey to the West End stage began in childhood when, with no musical theatre in her hometown, the film and soundtrack of Oklahoma! (also by Rodgers and Hammerstein) led her to discover Carousel and The Sound of Music. She studied opera at Oklahoma City University before heading to New York. It didn’t take her long to find her footing: after making her Broadway debut in Jekyll & Hyde, she landed lead roles in The Bridges of Madison County and, opposite Matthew Broderick, Nice Work If You Can Get It.

In the two years since the Lincoln Center’s celebrated production of The King and I she has taken a step back from theatre to explore a little more opera and television – you might recognise her from the second season of 13 Reasons Why, for example. Her children are now nine and five, she explains, and the life of a theatre actor is full-on.

“Theatre is my spirit, it’s my everything,” she says. “But if you’re successful it means you work every day, not just weekdays. You have six days of shows, and if you’re on Broadway you have something on your seventh as well. You work through the holidays and weekends.

“I wish there was a world in which we could do part-time theatre, but there’s no such thing as part-time theatre. You either do it or you don’t. I’ve often weighed it up, and it’s more worth it for me to do it.”

At a time when entertainment acts as a microcosm for wider gender issues, this lack of flexible working is recognised as an obstacle to equality. Then there’s the pay issue.

“I don’t feel like I’ve been slighted, but if I don’t think a pay gap exists I’ve certainly been proven wrong by everything that’s come out,” O’Hara says. “I do know that when I have a job I’m often paired with a high-paid, more famous actor. I always find I’m working just as hard, and sometimes – but not in this case – dealing with ego, too. I have to make sure everyone feels fed in a motherly way. I’m expected to hold it together. So it’s not just about doing my job on the stage. It’s about trying to appease everyone, and balancing between the male director and the male lead and male producers.”

We have to get past the idea of how someone is supposed to look in order to represent a personality, and let all women play all things

Another hidden difficulty is the typecasting of women, perhaps because the visuals need to tell the story in shorthand. But O’Hara suggests that, in order to be relatable, the stage needs to reflect the nuanced, realistic world in which we live. “We should go to a show with more open ears and blinder eyes,” she says. “We have to get past the idea of how someone is supposed to look in order to represent a personality, and let all women play all things.”

Although she is mainly referring to women of all shapes, sizes and colours taking on stage roles, even she – the picture of an American sweetheart – has prejudices to contend with.

“I don’t have anything to complain about, and I’m not going to pretend I do. But, as an example, I found work quickly when I was young, because I was a blonde and ingenue and sang with a soprano voice – and the minute I turned a little too old to play the ingenue I never played a blonde again. Now I’m playing more powerful women, and a blonde is not seen as intelligent, stable or strong. I mean, I don’t feel like being a blonde makes me less important and powerful, but in order for people to accept it my hair colour has to change.”

There is progress, even if it’s slow. The musical Hamilton is an industry disrupter, casting a diverse range of young actors to represent the United States’ founding fathers. (“My God, it belongs here,” O’Hara says.) And with the new momentum of feminism, the women of theatre are empowered to expect more.

“It feels like we’re starting to pick and choose who to work with, so the gap becomes narrower and we cut out the people that don’t want to recognise diversity,” she says. “We’re entering a new era now. I think before we took what we were given, and now it feels like we don’t have to any more.”