Three theatre shows to catch in Ireland this week 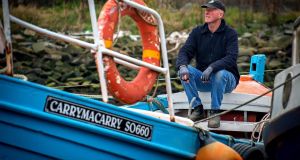 Furniture and Shelter
Mick Lally Theatre, Galway. Performed in repertory: Previews July 12th-14th 5pm/8pm Opens July 15/16-29 (Sat mat 3pm) €18-€26 giaf.ie
Druid may be synonymous with imaginative, yet sturdy stagings of canonical work; from Tom Murphy to Beckett to Shakespeare. But that hasn’t come at the expense of generating new plays. (When it comes to Murphy, some of the Irish theatrical canon actually started with a Druid debut.) The company’s commitment to its Druid Debut series of new play readings, however, is notable at a time when rehearsed readings rarely progress to full productions. This year, a double bill of new plays previously presented on the platform is staged in repertory, with Sonya Kelly’s Furniture and Cristín Kehoe’s Shelter performed on alternate nights during the Galway International Arts Festivals.

The plays are not connected, but they have certain congruences: in both, modern Irish people attempt to find their place in a confusingly transformed nation, whether that is within a tastefully appointed living room or museum space, or hiding out in Dublin’s disused and resonant Boland Mills. And in each, they wonder uneasily about whether their lives enjoy the same status as much vaunted things. Kelly’s glitteringly witty and wry play, Furniture, is really a suite of three plays, in which people project their desires upon furnishings while squirming over their relationships. In Kehoe’s Shelter, dispossessed friends hide away, row and reminisce while the clock counts down. This is the new Ireland, both seem to say; try and make yourself comfortable.

His family settled in Donegal in 1750 from Scotland, fleeing war, and he has been commissioned to build a vessel, the titular punt, to travel across piers in Sligo, Donegal and Derry for the show’s immersive, site-specific experience telling his story in his own words and in songs. Joined by Libyan-Irish singer Farah Elle and composer Little John Nee, Philip outlines the history and skill of his work, together with the poignancy of its uncertain future: Philip is the last in the line. Produced with Earagail Arts Festival, and supported by several other organisations, it is likely the start of an intriguing voyage and certainly the berth of a promising new company.