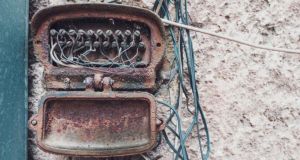 Project Arts Centre
★ ★ ★
Film-makers are not garbage collectors, Werner Herzog tells them, but the Polish artists Janek Turkowski and Iwona Nowacka won’t let this deter them from their mission. Documenting daily life in the oldest part of the city of Szczecin in minute detail, they have created a vast film archive, intended to form a time capsule to be discovered in 2109. Presenting a fraction of the images in the form of a video-storytelling performance, they give a deadpan commentary on their recording and elaborate classification methods, alongside footage of a slow pedestrian crossing, a turtle in a reservoir, roof repairs to a church. Obsessive collectors of these human traces, they create taxonomies of memory.

As in Turkowski’s more emotionally affecting piece Margarete, seen at the 2013 festival, this work deliberately frustrates the viewer’s impulse towards narrative, drama or biography. Just when we think we’re about to learn something about the artists’ own relationship they move on to another “chapter”. In the context of the millions of images accumulating on smartphones, this droll, gently ironic piece asks what will be made of these by viewers in the distant future. Resisting all assumptions about the significance that might be ascribed to their fragments shored against ruin, they can at least be confident that they are ordered impeccably.