Matilda to Beckett: the best in this week’s theatre

Like its protagonist, Matilda the Musical is not afraid to be clever, while Beckett’s words are put to music in Gare Saint Lazare’s Here All Night at the Abbey and beyond 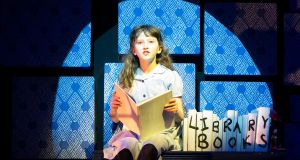 When the Royal Shakespeare Company first staged a musical adaptation of Roald Dahl’s captivating and scabrous book for young readers, Matilda, in 2011, it did so with a wickedly good meeting of minds. Pairing playwright Dennis Kelly with composer and lyricist Tim Minchin, brought together two distinctly edgy artists with just the right amounts of glee and subversive good humour. Still, for a family entertainment, which has long thrived by following much safer formulas, it was a leap in the dark as to whether such a collaboration would capture the imaginations of a new generation. In the end, nobody needed to lose any sleep about it. Matilda, a brainiac with telekinetic powers in a family of resentful dimwits, makes a good comparison for the soaraway success of the show, unashamedly clever among a throng of West End musicals of lesser ambition. Celebrating the power of the imagination over conformity, and waging a musical rebellion against the fearsome school principal of Crunchem Hall, Miss Trunchbull, the show has proven a model pupil itself, knowing just how much you can move, when you put your mind to it.

“Music always wins,” Samuel Beckett once said of his radio work, Words and Music. Now Gare St Lazare, who have eked out a worldwide reputation as Beckett’s most attentive and least adorned interpreters, revive the competition with Here All Night, a fusion of Beckett text and an original score by composer Paul Clark, with improvisations from The Gloaming’s Caoimhín ó Raghallaigh. First staged in Brighton, in 2013, and subsequently toured to New York, Boston and London, this marks the Irish debut of the project, which undertakes a national tour to Galway, Tralee, Limerick, Cork, Wexford and Dún Laoghaire. Co-created with director Judy Hegarty Lovett and performer Conor Lovett, the evening looks at the musicality of Beckett’s novel Watt, and other prose pieces, bringing them together with visual art, by Brian O’Doherty and movement from choreographer John Scott. It is, fittingly for Beckett, an international collaboration, with a musical trio led by O’Raghallaigh, soprano Melanie Pappenheim and a choir of six female singers.