How does War Horse work? A complex design of bungee cord, cane and leather 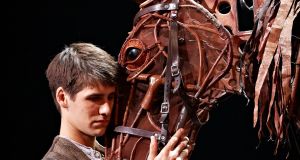 Reflecting on the phenomenal success of his play War Horse, former UK children’s laureate Michael Morpurgo, author of more than 100 books, wrote: “War Horse is not simply a show or a play about a war, a horse and a boy. It is an anthem for peace and reflects, I think, a universal longing for a world without war.”

I travelled recently to Stoke-on-Trent to attend a matinee performance of the resilient production, which will be returning to Dublin’s Bord Gáis Energy Theatre on April 10th for a three-week run, and to meet some of the creative talents behind its success.

This is the second time since the play’s premiere at Britain’s National Theatre in 2007 that the ensemble of more than 60 actors, puppeteers and technicians has upped sticks, mesh and resin and transported this theatrical event around the world.

If you happen to be one of the seven million people who have already seen the play, you will know that Morpurgo’s stark first World War epic tells the story of the bond between a boy and a horse, a connection that is sundered by war and then rekindled when they are reunited on the battlefield. You will also be aware that the drama is brought to living, breathing life not just by actors but by puppeteers inhabiting gargantuan, horse-sized puppets.

I ask resident puppetry director Gareth Aled what exactly it is that happens on stage to transform what audiences can see with their eyes into something extraordinary that they believe in their hearts. How can sticks and leather and mesh and resin create a cavalry horse? (And not just any old cavalry horse, but Joey, a courageous, vulnerable, magnificent and heroic cavalry horse who springs fully formed from his delicate foal’s body and dominates the stage). What alchemy happens in War Horse that magnetises and moves audiences over and over again?

“This play is a huge feat of storytelling, and each member of the 60-strong ensemble cares deeply about the production,” Aled says. “This play is set in a village, and it takes a village to make this play.”

The audience is an essential component of that village. Whether in its collective eagerness to be transported by the skill and artistry of the production, or in its wonder at the grace of the movement on display, the audience’s willing suspension of disbelief is integral to the intensity of the experience.

I’ve seen War Horse twice, as part of two very different audiences. The first time, seven years ago, was in the Lincoln Centre in New York, when even the brewing of Hurricane Sandy beyond the theatre doors didn’t deflect from the power of the piece. The second was on a balmy afternoon during my Stoke-on-Trent visit, when the auditorium was filled largely by schoolchildren, young inhabitants of a town that seems caught in its own crossfire of decimated industry and call-centre contract work.

I ask Aled whether reaction to the production changes from country to country.

“Audiences can feel different,” he says, “but in key moments there is a commonality of experience.”

I have witnessed how the concentrated, meticulous art of the puppeteer can convincingly suggest a cavalry charge to an audience – but, I ask, how is it actually done?

“Through a complex design of bungee cord, cane, mesh and leather,” Aled says.

Each of the large puppets, he tells me, are operated by three performers, who inhabit the massive cage of the beast. There is one puppeteer to operate the head, and one each for the heart and the hind. Each component part of the animal is imbued with both physical life and an emotional indicator. For example, the performer who operates the head uses bicycle brakes to operate the ears individually.

“Horse’s ears work like satellite dishes,” Aled says with enthusiasm. “They  can follow a human walking through a space.”

Passive ears are a sign that a horse is relaxed; pulled back, they can indicate terror. Similarly, the heart puppeteer can change the mood by pulling a trigger on a bungee cord that furls and articulates the hooves. The hind puppeteer, meanwhile, controls the horse’s gait, also using bicycle brake levers to operate the the tail.

The unified rhythmic movement of the puppeteers, up and down, suggests breath and, by extension, how a horse is feeling.

“All the puppets breathe,” Aled says. Sensitively miked, the puppeteer-actors also articulate the sound of the animals’ breath.

Beyond the cast’s physical skills, however, is the importance of their symbiotic understanding.

“The head puppeteer can often finds themselves running backwards, but their eyeline mustn’t shift,” Aled says. Audiences are so closely attuned to eyeline, he explains, that if a puppeteer was to look over his or her shoulder, the spell would be entirely broken.

As if we, too, are controlled by an invisible set of strings, the audience are in the hands of the puppeteers. The conviction of the ensemble compels our belief.

“All the actors believe that the puppets are more deserving of your attention than they [the actors] are,” Aled says. “This play, from a company who believe in the work and deliver it on a daily basis, is greater than the sum of its parts.”

A family show, War Horse is nonetheless a big, unforgettable theatrical experience. The thunderous soundscape and dramatic lighting design had the punters in Stoke-on-Trent hopping up out of their seats. But it was the simple heartbreaking humanity of the story that held the attention of the young audience.

There is a moment in the play when Joey, snarled up in barbed wire in the middle of no man’s land, is approached from two sides by a German and a British soldier, who toss a coin to decide his future. It is in this momentary cessation of conflict that the devastation of the innocent is finally understood and the underlying theme of the futility and pity of war resonates most potently.