Code of behaviour for Irish theatre to be established 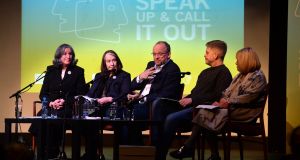 Michael Colgan “has a case to answer” to the theatre community, the chairman of the Gate Theatre, Peter Crowley, has said.

Speaking at the Speak Up & Call it Out event in Dublin on Wednesday, Mr Crowley said it had been established that Mr Colgan had a case to answer.

“I think it is in some ways up to him as to how he deals with that. I’m not advising him and I wouldn’t pretend to.”

Mr Colgan has “rejected outright allegations of sexual harassment” made against him in the findings of a review of his behaviour at the theatre.

He also denied claims of bullying, shouting at staff or using profane language, in the review earlier this month into allegations of inappropriate behaviour and abuse of power against him.

Mr Crowley was part of a panel discussing accountability on Wednesday at Speak Up & Call it Out, an event to establish a code of behaviour for Irish theatre. The initiative, led by Irish Theatre Institute and supported by the Department of Culture, Heritage and the Gaeltacht, is part of the theatre sector’s collective response to allegations of abuse of power, and coincides with calls to action in theatre internationally.

Some 300 representatives of the sector gathered in Dublin’s Liberty Hall to discuss a draft code of behaviour to protect Irish theatre practitioners, makers and presenters.

Mr Crowley said the relatively new Gate board is implementing the recommendations of a review into abuse of power and bullying at the theatre. “One of those is that Michael Colgan has a case to answer, and that while recognising that he is no longer an employee, we need to examine whether there are ways that we can access another element of accountability.” The report acknowledges this is “difficult”. “Because the contract falls away when someone is no longer an employee, and so the obvious steps you would take are denied.”

Mr Crowley said: “we will continue to examine that, but there is no easy answer.” He said the board will continue to implement recommendations, “but we can’t create a framework where the most obvious way of dealing with something is denied to us. We can only do our best. Reverse engineering of accountability is difficult.”

Minister for Culture, Heritage and the Gaeltacht Josepha Madigan opened the event, saying the process would “not ignore the hurt and damage that has been done to so many people across the sector, women and men, across too many years and in many locations”.

“We must honestly acknowledge that failures occurred. It is simply just not acceptable. This culture cannot be allowed to continue under any circumstances anymore,” she said.

“Let us work together and take collective responsibility to change behaviour and create a safe, respectful and dignified workplace. Let us ensure that those who fail to observe these values and practices will be held to account.”

In her contribution, activist and theatre maker Grace Dyas said when she wrote a blog about an experience with Mr Colgan, “it felt like I had thrown a grenade. People started to write to me and tell me their own experiences, of abuse of power, sexual harassment and bullying: 311 people have written to me so far. Their experiences are in media, politics, law and the overwhelming majority are in theatre.”