Waking the Feminists campaign wins a Tonic Award in London 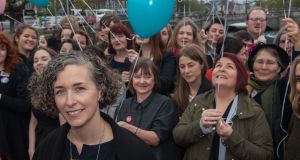 Waking the Feminists, the campaign for equality for women in Irish theatre, has won a Tonic Award in the UK.

The award for “a brave and creative campaign to effect positive change in regard to representation of women in Irish theatre” was made to Lian Bell, founder of WTF.

The ceremony at the May Fair Hotel was hosted by journalist and BBC Radio 4 broadcaster Jenni Murray, who wore a Waking the Feminists badge.

The second annual Tonic Awards, celebrating the achievements of women in theatre, are given by Tonic Theatre, which supports the theatre industry to achieve greater gender equality in staff and repertoires.

Presenting the award to Bell, the set designer, arts manager and campaigner at the helm of WTF, Ursula Rani Sarma lauded Waking the Feminists “for a brilliant campaign for greater representation of women’s voices in Irish theatre and beyond”.

The Irish/Indian playwright, screenwriter and poet Ursula Rani Sarma, said “It was Lian Bell who decided that enough was enough! To say it was a movement isn’t enough. We were all part of something that was bigger than our individual experiences.”

Still slightly reeling at the illustrious company. Hurray #WakingTheFeminists! Well done all of us! #TonicAwards https://t.co/wPnOQspT9V

Afterwards Bell tweeted she was “still slightly reeling at the illustrious company. Hurray #WakingTheFeminists! Well done all of us!”

The grassroots Waking the Feminists campaign, which ran from November 2015 to November 2016, called for equality for women across the Irish theatre sector.

It included women and men - writers, directors, managers, actors, designers, choreographers, technicians, programmers, producers, artists and audience members - who spoke out for equality for women in Irish theatre in Ireland.

The campaign encouraged and supported individuals to speak up; to interrogate what stories are told, who gets to tell those stories, who makes those decisions, who is represented, and who has the money. It also conducted research into gender representation in Irish theatre.

The award came on the eve of preparations for Wednesday’s event hosted by the Irish Theatre Institute in Liberty Hall, Speak Up and Call it Out, which aims to establish a code of behaviour for Irish theatre.

At the Tonic Awards, playwright Caryl Churchill was honoured for “an extraordinary career, in particular her consistent daring to defy form, leading the way for a new generation of female playwrights, breaking down walls within the theatre industry”.

Journalist and theatre critic Lyn Gardner won an award for “her dedication to showcasing new voices and productions as a theatre critic and her thoughtful contributions to debate within the theatre industry as a journalist”.

Director Katie Mitchell was given an award for her artistic work, proactive support of younger female theatre artists, and dedication to foregrounding feminism on stage.

Others at the awards were Gemma Arterton, Maxine Peake and Emma de Souza, who was honoured for her commitment to bringing new audiences into London’s West End through Kids Week.