Enda Walsh: Grief is the Thing with Feathers floored me 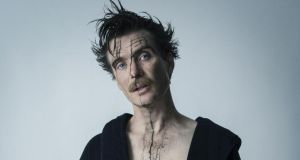 The worst thing in the world has happened, yet the world doesn’t have the decency to notice.

“Where are the fire engines? Where is the noise and clamour of an event like this?” run the thoughts of a young boy, bereaved with his brother and their dad following the sudden death of their mother. “There should be men in helmets speaking a new and dramatic language of crisis.”

In Max Porter’s tremendous first novel, the affecting and nimble Grief is the Thing with Feathers, this absence immediately ushers in a strange new presence. Swooping into their two-bedroom London flat, comes Crow, perhaps a manifestation from the mind of Dad, a sardonic Ted Hughes scholar, cawing out taunts and consolations. “I won’t leave until you don’t need me anymore,” he tells Dad, part assurance, part threat, sharing the narrative. Grief is home to roost.

“It floored me when I read it,” says Enda Walsh, now forging that dramatic language of crisis for the book’s stage adaptation for renowned London theatre company Complicité. “I had written about grief before, but I thought structurally, Max completely captured it. That’s what it feels like when time is cut up and there’s no linear narrative to unfold. It is an outer body experience, either experiencing grief or falling in love. You can’t control it.”

That makes adaptation sound like a particular challenge. Porter’s writing has a skirling energy, hopping between prose and poetry, emotional heft and literary allusions, with the unpredictable and often exhilarating, shape-shifting quality of grief. But if Porter’s readers feel protective of the work, the author is entirely open to collaboration.

“I believe in an economy of trust,” Porter says, “whereby nothing good will come of holding on to things in a protective way.” In part, that is informed by his day job, as editorial director of the publishing house Granta, but he has experience now on both sides of collaboration. “I love being translated,” he says from his office in London. “One of the things for me early on was to think of the theatre adaptation as the latest in a line of translations.” Besides, he adds with good spirit, the book is meant to be a bird: “I want it flying away. Of all the things to try and maintain control of, my bird-like prose poetry fable is not one to hold on to.”

In this, Walsh is clearly the person for the job. As a playwright, his own work from Disco Pigs through Ballyturk and on to the recent opera The Second Violinist has always mingled the real and the surreal, teasing out the role of stories in life while taking daring approaches to form.

Working with his long-time collaborator and friend Cillian Murphy, a physically adventurous performer on stage here playing Dad, opens up a world of intriguing possibilities. “I said to Max early on, Crow and Dad are one and the same, aren’t they?” Walsh tells me. “You cast Dad and Crow through the one body and then Crow is everywhere.”

For the experience to work, either on page or stage, Crow really should get everywhere. Porter recalls a blank page appearing in the first edition of the novel, which nobody at Faber & Faber could quite account for, yet seemed like a happy accident, corresponding with a gathering silence in the narrative. “It was almost like a ghost in the machine,” says Porter, “as though Crow had gone in and done it himself.”

Both writers enthuse about the “crow-like” qualities in each other’s work; the surprising, puckish leaps that put some shape on otherwise inexpressible experiences. They are both fascinated with how artists deal with grief – Porter was student of Hughes and Emily Dickinson (who inspired his title) from an early age – how they channel it into their work, make sense of it, birds of a feather.

Walsh is quicker to acknowledge that Grief is the Thing with Feathers draws from a tragic, real source: Porter’s father died when he was just six, and his book is dedicated to his brother, Roly, now a musician and composer. (“Some of this book is autobiographical,” Porter allows, almost in passing.)

“It’s about Max and his brother Roly dealing with the death of their dad,” Walsh told me one morning last week, as he walked from his home in London to the last day of rehearsals. Walsh has adapted work only twice, bringing Dostoevsky’s The Brothers Karamazov to the stage as Delirium, for Theatre O, and Roald Dahl’s The Twits to the Royal Court. (“A really terrible adaptation,” he offers, “which I wanted to shoot in the face.”)

Here, working at the service of a living writer’s story, he was inclined to be more direct, more specific with his approach. In the book, for instance, the boys refer to a hurricane “around the time that Mum died”, and Walsh understood it as a reference to the Great Storm of 1987. “It all felt direct,” says Walsh; “that there’s a storm outside the window, London and England is being ripped apart, but actually inside it’s worse.”

On the stage, that gives Complicité’s production a certain familiarity. Workshopping the production a year ago, Walsh appreciated its chaotic emotion – “those swings between hilarity and crushing f**king tragedy” – yet also came to understand the importance of a stable domestic setting. “It’s a man trying to see his kids and get on with stuff, while the world is continuing, yet there’s this f**king Crow in there, mixing up everything.”

That doesn’t sound a million miles away from the style of Walsh’s theatre. “I’m interested in interiors, in flats, and ghosts,” he agrees. “In strange occurrences, things not being what they are, logic bending and all that kind of thing. That’s in the book, though. I can’t escape it.”

For Porter, the capabilities of the stage are a new discovery, and for good reason. As a man who stands at 6ft 7in, in a city whose theatre auditoria have barely been reconsidered since the 19th century, he is not a regular theatregoer. “I find it super uncomfortable,” he says. “Do I really want to spend 60 quid for the pleasure of not being able to walk for a couple of days?”

Nonetheless, being in a rehearsal room has been eye opening. “They’ve kept on saying the main aim of this show is to try and get in the viewer the feeling they both had when they first read the book,” Porter says. “And for me, I’ve had real epiphanies about that book watching Enda and Cillian working on it.”

Initially, Porter suspected that the language of the book would take a second place to its staging, wondering fancifully about the possibility of showboating set pieces or animatronic birds. Instead the language has been intensified through storytelling.

“To me, that is what the thing is about now,” says Porter, as though its secrets had been unlocked: “It’s about stories. They all fill in the mother’s absence with their stories.” The results, he thinks, are “astonishingly direct”, inspiring in him something more like a magpie: “If the novel could borrow some of that – the unapologetic potency of encounter between the audience and performer – it could do some really interesting things.”

If Porter and Walsh are kindred spirits, it is because they seem alive to what they can do for each other, what they can borrow for their respective art forms. Walsh may speak of “wanting to get it right for Max and his brother”, but he is also attentive to the development of his own craft.

Apart from Murphy, the production also involves many of his frequent collaborators, including composer Teho Teardo, designer Jamie Vartan and sound designer Helen Atkinson, while it is presented in association with his regular producing partners Landmark Productions and Galway International Arts Festival, and co-produced by six international theatres who collectively suggest a future touring route. “We’re sort of testing what we’ve done before,” admits Walsh, “but pressing out a little bit.”

Where Arlington, his most recent play, dealt with grief in an abstract, all-encompassing, sometimes alienating way, Walsh sees Grief is the Thing with Feathers as “much more centred and real”.

“Effectively, it’s therapy through story,” Walsh says. His version sees Dad and the Boys ushered into the frantic performance of story after story by Crow, an unlikely counsellor. “It makes them physical beings, not lumpen, depressed people, but people who are exhausted and alive, who need to be shaken out of it.” There is something similarly transformative in how art confronts the subject. “It keeps changing,” Dad says of grief, to Crow’s approval, late in the book. The collaborators here would agree, magnifying it, suspending it, affording it strange new shape and voice, but ultimately transforming it along new stages of grief.

Getting closer to the whole truth of the Troubles
8