Are bees the key to colonising Mars?

Review: The Diary of a Martian Beekeeper impressively marries science and theatre 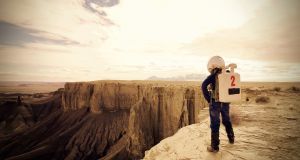 The answer to growing food in the inhospitable terrain of Mars could be the same as here on Earth: bees.

In the week he died, Stephen Hawking speaks again in voiceover at the start of Niamh Shaw’s stimulating and profoundly imaginative examination of cosmic scientific ideas and consequences.

If, as Hawking believed, humankind needs to colonise the stars to survive, how will people grow food in the inhospitable terrain of, say, Mars? The answer, according to Shaw, is the same as here on Earth: bees.

The author plays a scientist/astronaut who comes from generations of Irish bee-keepers. It is 2036, and Niamh O’Shea (her alter ego), a national hero back home, has been sent to Mars to tend hydroponically-grown plants in climate-controlled green-pods. When the conditions are perfect, three hives of bees will arrive from Earth to see if they can pollinate the plants in conditions of reduced gravity.

If all goes well, the next step might be to colonise the Red Planet with humans. This may sound a bit theoretical, but an intensely human story plays out between her family on Earth and the astronaut alone in her pod on Mars. The help and communication via time-delayed, crackly messages, from the scientific team and her parents in Ireland mirrors the mutual interdependence of a beehive: one of Shaw’s many clever touches. Another is the neat symmetry of the white space-suit and the white beekeeper suit.

There’s rarely more justification for a one-person show than when it’s set in the solitary world of a spacepod, but this show feels very connected, not least because of the regular on-screen presence of images and interviews, both expository and narrative. This is an impressive marriage of science and theatre in a futuristic story that is not fanciful but based on real science and real experiences.

It’s possibly a misleading title, making the show sound sillier than it is. Because although it is very accessible, futuristic and often humorous, it’s about real things, like relationships, and big topics: the future of humanity and challenges for the planet.

And the ultimate joy in this thought-provoking show: when you’re all alone in a space-pod, you can dance wildly with joy when you hear your bees are arriving (and she’s a great dancer).