Ken Dodd’s best lines: ‘When my kleptomania gets bad I take something for it’

He was the Springsteen of seaside comedy, with no hatred or bullying to his humour 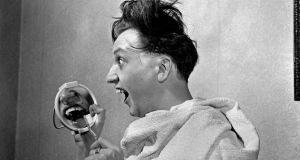 Ken Dodd: Appeared in the ‘Guinness Book of Records’ for the longest joke-telling session

Ken Dodd was the Bruce Springsteen of naughty seaside comedy. Even is his late 80s he was putting on five-hour shows. He would pause the merriment only to remind audience members “most of you will have been reported missing by now”.

His death, aged 90, robs comedy of the last living link to the music-hall masters such as Arthur Askey and Max Miller.

Despite his idiosyncratic manner and eccentric humour, his influence lives on. You can hear his comedic stylings as much in the Irish comic Jason Byrne as you can in acts such as Milton Jones and Tim Vine.

For all of the hyperactive juvenilia of his material, he was taken seriously by high-brow theatrical critics. “A Ken Dodd show is an experience of ecstatic liberation in the theatre” ran one review.

From Knotty Ash in Liverpool, Dodd came up through the unforgiving Working Men’s Club circuit. With his protruding teeth, unruly hair and his ever-present “tickling stick”, his act owed much to the techniques of Commedia dell’arte.

He combined a gentle surrealism reminiscent of The Goons with a world-beating jokes-per-minute ratio. Such was his gag rate that he entered the Guinness Book of Records in the 1960s for the longest joke-telling session: delivering 1,500 jokes in three and a half hours in one show: 7.14 jokes per minute.

Over his 70-year career, he blithely ignored new trends and patterns in stand-up – the rise of Billy Connolly and first-person narrative comedy and the advent of “alternative comedy” were all alien to a man who judged his success not by the strength or by the confessional nature of his material but the duration and frequency of audience laughter.

His work rate was phenomenal – an average of 175 four- or five-hour gigs per year. While a lot of today’s big comedic names struggle when they go over the one-hour mark, Dodd would typically come on stage at 8pm and not leave until close to 1am.

Although a life-long Conservative party supporter, there were no politics, no targets, no polemics in his sets. Everything was joke-orientated, and it didn’t matter how puerile or derivative the material was. Such was his dedication to his craft he carried around with him everywhere he went folders of notes on which he had noted what jokes had worked best in terms of audience response and what jokes needed refining.

He would take it as a personal affront if material didn’t elicit laughs – “if you don’t laugh at what I’m saying now, I’m going to follow you home and shout my routine all over again through your letterbox later” he used to warn from the stage.

A different side to the man (almost nothing was ever known about his private life) emerged during a court case in 1989 when he was charged with tax evasion. His defence team portrayed him as a lifelong eccentric, someone who didn’t trust banks but instead kept £336,000 in bank notes stuffed into suitcases in his attic.

When asked by the judge “What does a hundred thousand pounds in a suitcase feel like, Mr Dodd?”, he replied “The notes are very light, M’Lord”. He was acquitted of all charges.

Although best known as a comedian, he was also a Shakespearean actor (appearing once in Kenneth Branagh’s Hamlet film) and a singer who knocked The Beatles off the top of the charts in the 1960s with his single Tears.

His greatest gift though was his realisation that you can’t perform a comedy show at an audience, you can only perform it with them. Which is why his act never really transferred to television – a Ken Dodd show was aimed at the front, middle and back rows – not for an abstract television audience.

“I tell people I have the best job in the world because I only see happy people, I only see them laughing, and it’s a wonderful feeling” he once said.

He left his audiences with little choice rather than to capitulate to laughter. He was relentless in his professionalism. His shows were a battle to the death – and over five hours there was only ever going to be one winner.

I have kleptomania. When it gets bad I take something for it

I just read a book about Stockholm Syndrome. It started off badly but by the end I really liked it

So it turns out that if you bang two halves of a horse together, it doesn’t make the sound of a coconut

Do I believe in safe sex? Of course I do. I have a handrail around the bed

My dad knew I was going to be a comedian. When I was a baby, he said, ‘Is this a joke?’

Did any of us in our wildest dreams ever think we’d live long enough to see the end of the DFS sale?

I used to think I was marvellous in bed until I discovered that all my girlfriends suffered from asthma.

Age doesn’t matter – unless you are a cheese.

Tax self-assessment? They stole that idea from me.