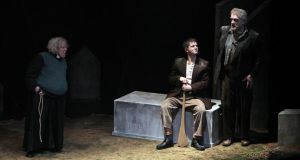 If that didn’t already recall the mordant absurdism of Samuel Beckett, the sight of these musty, matted figures in Livin’ Dred Theatre Company’s modest touring production, bickering astride a grave, ought to seal the deal.

Their own bitter endgame must be delayed, however, when Thomas reveals that somewhere out there is a son he never knew: a young stripling aged 70. Da would like to meet him.

And so, packing up old grievances that would give Monty Python’s outlandishly deprived four Yorkshiremen a run for their penury – like the great olive crisis or the 1916 oxygen ban (“And no one allowed to breathe on weekdays”) – together with Da’s reflex disdain for the English, a precious family heirloom, they set out on a quest to meet the future. What will they pass on?

As director, Aaron Monaghan is as dutiful to the play as the obliging Thomas is to his da (including the live performance of Jim Doherty’s nimble score for guitar and fiddle), although less likely to seek departure.

That it plays like a shaggy-dog story is partly the point. Stories here, whether wide-eyed accounts of one man’s legendary fertility or another’s ridiculous powers of perseverance, are entertaining send-ups of otherwise stifling legends. It doesn’t seem accidental that any word of religion comes with a forelock-tugging reference to “your man”.

But the Catholic Church is a more diminished force now than it was even 15 years ago. In the play such influences are already dissolving as poignantly as Da’s memory – or, more optimistically, his prejudices. “Is that what tradition is? Everyone standing still and looking backwards?” Thomas finally remonstrates. Even if Da disappears, the play knows, there’s no getting rid of him. Such is the way with tradition. You have to make your peace with it to be able to move forward.

At the Abbey until Saturday, May 11th, then at the Everyman, Cork, from May 21st to 24th

Marita Conlon-McKenna: ‘I didn’t think I would write another Famine novel’
8

Isabel Allende: ‘Where are my roots? They are in my books’
9