Bread Not Profits review: a play that touches the soul 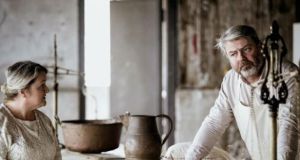 Shakespeare used his history plays to explore issues relating to the morality of power and kingship and to question when it might be right to rebel. In Gúna Nua’s production of Mike Finn’s latest history play Bread Not Profits, the question repeatedly asked of the audience is “ whose side are you on?” , by the end it’s not a very difficult one to answer.

In this promenade-style production, which traces the events surrounding the unique Limerick Soviet of 1919, it’s impossible not to cheer for the ordinary workers who had the audacity and courage to strike against the military might of the British Empire.

Set in the haunting dereliction of Limerick’s Cleeves toffee factory, one of the first factories where the workers downed tools in 1919, Finn’s Bread Not Profits walks you through a time and place all but forgotten. From the shadows of history men and women emerge like ghosts demanding to be heard.

Finn’s skill as a writer has always been to reduce the big story to the small people whom history tends to ignore. Therein he finds his truth. Previous plays like Pigtown and The Unlucky Cabin Boy retraced other Limerick stories, but in Bread Not Profits, Finn and the entire creative team, led by director Terry O’Donovan and supported by Emma Fisher, Zia Bergin-Holly and John Galvin, with original music by David Blake, use the Cleeves space to create something that is truly exceptional in both scale and content.

Ordinary people caught up in something extraordinary, but still having to put bread on the table

The danger was always that a play about history would remain just that, something frozen in time, a tableau or pageant at best. However, with Bread Not Profits, O’Donovan’s use of the space, the decision to move the audience in small groups led by a musician around the site, the focus on the quiet lives of bakers, lovers, telegraph operators and foot soldiers makes for an intimacy that is unexpectedly poignant.

This is an energetic ensemble performance by a cast including Charlie Bonner (Pat Dalton) Gene Rooney (Nell Dalton) Ann Blake (Kathleen Connell) Kit Thompson (Harry Lumley) and Georgina Miller (Sally McGowan). Time dissolves each time we come face to face with them, ordinary people caught up in something extraordinary, but still having to put bread on the table.

Every now and then the audience regroups in a vast vault like hanger, the core of the production where the strike committee of Conor Madden (James Carr) and Karl Quinn (James Casey) are marshalled by a pugnacious Pat Ryan (John Cronin) struggling with the scale of their responsibility.

Their sheer nerve and audacity is mirrored by the enormity of the cavern where these scenes are exquisitely played out with a cinematic quality reminiscent of Warren Beatty’s 1981 film Reds.

There is no attempt to veer away from the epic in this production, cleverly completed by the careful use of a large supporting community cast directed by Cairde Tobin but there is a determination to prevent excess by returning again and again to the personal and the intimate which is what makes it all work so well, a meticulous attention to detail.

Throughout Finn writes with great tenderness, making it impossible not to care. Some plays tug at your heartstrings, some, very occasionally touch your soul.