It Was Easy (in the End) review: Capitalism is the root of all evil in TheatreClub’s new show 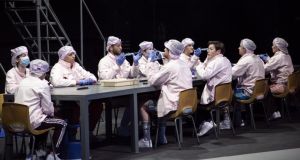 TheatreClub: It Was Easy (in the End) at the Abbey Theatre

IT WAS EASY (IN THE END)

Abbey Theatre, Dublin
★★★☆☆
Capitalism is the root of all evil in TheatreClub’s coproduction with the Abbey Theatre: the homelessness crisis, the stubbornly deathless patriarchy, resistible climate change, the First World’s smartphone-addled inertia, the Second World’s smartphone-manufacturing exploitation; you name it.

Guided by Slavoj Zizek’s maxim that it is easier to imagine the end of the world than the end of capitalism, the alternative-theatre company now try to imagine alternatives in several ways. This is primarily through a contemporary Dublin staging of Hamlet, loosely and amusingly followed by a large ensemble. But the play is hardly the thing. Hamlet’s ubiquity on the stage, we understand, is part of the problem, in which art and protest have been declawed. It is not at all clear, however, who is doing the staging or why. TheatreClub? A therapy group for Chinese factory workers who assemble iPhones? A collection of Irish homeless people who have somehow occupied the Abbey stage?

“I’m worried you won’t get it,” the company’s lighting designer, Eoin Winning, tells us, with due cause, in a wry on-stage introduction, but further illumination doesn’t seem like his priority.

Presented as a series of theatre “exercises”, in which the company mesh into factory workers (director Doireann Coady sits above the ensemble, in an overseeing booth, issuing enervated commands), and later protesting homeless characters, the show gathers in overlapping hallucinatory layers.

“Create a bit of ambiguity,” goes one mantra. “It might come in handy in the end.” What is to be, or not to be, taken seriously here, the show teases. The guns adopted by a band of radical feminists called the Ophelia Group, a frog intended to be boiled alive, or the show’s own revolutionary intentions?

Hamlet, another avenger with no clear strategy, has a tendency to overthink and overcomplicate things. Perhaps Grace Dyas, the writer of It Was Easy (in the End), likewise wants to resist the streamlined, digestible form of bourgeois product with her customary drift of demotic and poetic speech. But perhaps this sprawling undertaking is itself confused.

Over the course of its three-plus hours, it is often easier to imagine the end of capitalism than the end of the show. Archly self-reflexive, it will pause to jokingly apologise for every transgression – inadequate female representation, say, or the actors’ anxieties about portraying other ethnicities – while performers agonise over social-media faux pas (“Fuck! I’ve been cancelled!”) or the failure of the National Theatre of Ireland to still be a crucible for revolution, for art to make a difference.

This comes with some understandable self-deflation: “We burned our phones in a bucket so we can be free in our minds,” someone explains. But when it isn’t flip it’s not much more persuasive: the supposed boiling of a live frog, to somehow shock the audience into ending capitalism, the presentation of suicide as a political act, even the speeches of Hamlet, reverently performed by Barry O’Connor, feel desultory, shorn of effect.

That makes an incantatory last act appear more glib; the ensemble, now dressed in cult-like white, explain the world’s achievements from a postcapitalist Utopia: how they buried arms, healed trauma, dismantled walls, fixed homelessness. This last feat, John Cronin sweetly explains, required workshopping Shakespeare with politicians in the Dáil bar. When they hit an impasse, he tells us serenely, “I could see we were going to have to read a lot more Hamlet”. It’s a light moment in imagining the antidote to capitalism. But even they aren’t buying it.

Runs until Saturday, May 4th