A Love Like That review: Wistful drama teeming with myth and legend 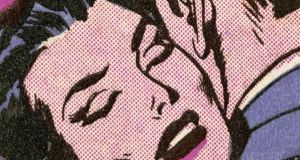 A Love Like That: the play is filled with allusions to myth and legend. Photograph: Brendan Foreman

A provincial library on the verge of closing would make an evocative setting for a playwright as allusive as Billy Roche, even if it wasn’t called the Avalon Library. If that reference, and the handsome stone tower of Ciaran Bagnall’s two-storey set, summons to mind King Arthur’s reading room, its small-town inhabitants also seem to have one foot in mythology. In Roche’s characteristically wistful drama, even modest figures might be legends in their own lifetime.

As the library clears its shelves, perhaps it’s inevitable that Roche’s references should also become jumbled up and scattered. Ellen (Lesley McGuire), the senior librarian, is isolated, chaste and so exaggeratedly shrewish she points one admirer to the Shakespeare shelf, as though in citation.

Appearing in the first act bearing an archer’s bow and arrow, though, Ellen might also point out the locations of Greek Classics, English Folklore and the Chekhovian Principles of Ballistics. As her junior colleague Debbie (Jane McGrath) will know, as a mildly intimidating Masters in Library Science graduate, that bow must get fired.

At whom, though? As Aidan, the library’s older habitué, Peter Gowan consumes knowledge (or at least trivia), as an excuse to stay within Ellen’s firing range. Geoff Minogue’s caddish wanderer Lance, returned after long exile at sea and set to woo, completes an archetypal love triangle. (The arch placing of a book on gender studies in this room doesn’t shift Roche’s old-fashioned priorities, or a play where everyone is adrift in stories of the past.)

Take away this scaffold of world mythology, though, and what are you left with? Behind Decadent Theatre’s serviceable staging of a meandering drama, director Andrew Flynn recognises that this may be Roche’s fundamental question too. The library is closing, gradually stripped bare for redevelopment, and as some characters wish heedlessly for a passion they know is fleeting, it comes with a bittersweet sense that their own chance for a richer story is running out.

Like Lalor Roddy’s down-and-out sage, John-Joe – variously mocked but respected for his conjuring – the play wonders for their future beyond this haven, where human imagination has been wounded and the world is bleeding out its magic.

Runs as part of the Dublin Theatre Festival until Saturday, 5 October