Beckett’s Room review: A play with no performers and plenty of magic 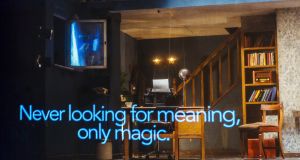 In Dead Centre’s wildly ambitious co-production with the Gate Theatre, on the other hand, there is meaning in its magic, depicting this furtive and formative time in the writer’s life as an elaborately conceived disappearing act. We do not see a cavalier Sam and his much warier partner, Suzanne Dechevaux-Dumesnil, on Andrew Clancy’s two-tiered set, but we hear their voices and observe their trace. Beckett’s chair swivels as he types out coded messages for the Resistance. Suzanne’s body, and even her breathing, leave impressions on a battered sofa. Like Godot, they are conspicuous by their absence.

To an audience of young and not so young people, this initially carries the goofy pleasures of a dazzling parlour trick. Listening to Brian Gleeson and Barbara Probst’s voices on headphones – moving through the space, in Kevin Gleeson’s fastidious sound design, as pronouncedly as Foley footsteps – the effect is of an illustrated radio play; albeit, in co-directors Bush Moukarzel and Ben Kidd’s collaborative script with Mark O’Halloran, more narratively conventional than anything Beckett would have created.

As subtitles track across the scrim, translating Viviane De Muynck’s landlady and collaborator as she snoops (at one wickedly amusing point, controlling her own marionette witch), and later trailing Gestapo members as they ransack the deserted home, your attention is ushered from place to place. Sometimes you see the reflection of a person, or, more effectively, their shadow, while your imagination fills in the gaps.

Anything less than perfection in these stage effects tends to break the spell and, impressive as the puppetry is, the effects are not perfect. Floating objects can becomes complicated to the point of entanglement; plumes of cigarette smoke clever to the point of distraction. The text, likewise, bears many fillips, lightly alluding to its own conceit (“No one can see us”) while imagining the cruel absurdities of the war as prefiguring Beckett’s Godot: a carrot and turnip supper, the stasis of war (“Let’s go,” says one German soldier, during a menacing double act. “We can’t,” says his superior), a voiceless, tortured “pig” prisoner, Suzanne’s recollection of their vagabond existence.

If that asks you to see Beckett’s life in his work, the play finally becomes more thesis than biography. In one interlude, José Miguel Jiménez’s excellent video work erases figures from Paris’s streets, before Beckett’s artists friends admit to never seeing a body during the war. Yet they must recognise them. And what is more difficult, after such horrors have changed the world, they must find new ways to represent them. That is where Dead Centre make meaning from their magic, with an outline of how Beckett came to depict the unimaginable, if we’re willing to see it.

Runs as part of the Dublin Theatre Festival until Saturday, September 28th