One man hurled a transphobic slur and a burger. Nobody did anything

Anti-trans violence: ‘This is a matter of life and death,’ says Travis Alabanza, whose one-person show Burgerz tackles the issue head-on 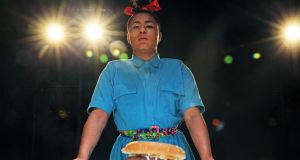 Travis Alabanza calls the oppression and violence that trans people face ‘terrifying’. Anti-trans hate crimes are on the rise and suicide rates in the community are shockingly high

In April 2016, Travis Alabanza was walking across Waterloo Bridge in London, surrounded by people, when a man called them a transphobic slur and threw a burger at them. Nobody intervened. Nobody stopped the man who threw the burger. Nobody did anything.

This is just one of many transphobic incidents Alabanza has faced over the years. Alabanza – who is gender non-conforming and uses they/them pronouns – was so used to being mistreated in public that they didn’t even bat an eyelid when they had a burger thrown at them.

“I tried to push it out of my mind,” Alabanza says. “Then two weeks later, I was looking at my dress and it still had the stain of the mayonnaise on it. I was like, ‘Why is it that I’m having a burger thrown at me, and for some reason I’m just carrying on?’ I realised that – as a gender non-conforming person, as a trans person – I was so used to the harassment I was experiencing that even the quite ridiculous event of a burger being thrown at me didn’t stop me in my tracks.”

The incident gave rise to Alabanza’s one-person show, Burgerz, which recently finished a successful run at the Edinburgh Fringe festival. It is now set to come to Dublin’s Smock Alley Theatre as part of the Dublin Theatre Festival in October.

“The show is less about the moment of violence itself,” Alabanza explains. “I’m not going to give people a show where they can indulge in my violence. Instead the show is saying: ‘What is it about society that makes us continue on with our day when people are facing hurt?’ When I sat down to make the show, I was like, ‘This show can’t just be about me. It can’t be a therapy session – I’ve done my therapy, I’ve done my processing – this show has to be about the hundred other people on that bridge who didn’t do anything.”

With Burgerz, Alabanza has become one of the most vital LGBTQ voices on the theatre scene today – but getting there was no easy feat. They grew up on the outskirts of Bristol in a council estate where there was no easy access to the arts. Alabanza didn’t spend their childhood in the theatre, so they had to find their own way into performance.

“When you’re growing up poor, your whole goal is to no longer be poor, so you press yourself to go into a more academic setting if you can, or get a more secure job,” Alabanza says. “But I couldn’t shake off the fact that I was a performer. All the ways I was processing my emotions were through writing and performing. I didn’t really now I was an artist – I just knew I had a lot of stuff to say.”

While Alabanza had a lot to say, finding a way to express those thoughts was a different matter. They had their first taste of the stage when they played a witch in a school play. They later moved to London where they got involved in the cabaret scene. It was there that Alabanza encountered queer theatre for the first time.

“I thought that being a performer meant that you were acting in a Shakespeare play or were doing a script, and suddenly there was a whole world of live art performance,” Alabanza says. “I kind of got hooked on it.”

Alabanza’s major stage debut came in 2016 after being cast in Putting Words In Your Mouth, a theatre performance by queer artist Scottee.  Alabanza wanted to explore black and trans experiences in more depth on the stage and was eager to play characters that shared these identities. Sadly, they quickly discovered that, by and large, these characters did not exist – and that the only way they could be brought to the fore was if they started writing them.

Representing the trans experience on stage has never been as important. Trans and gender-non-conforming people are more visible today than ever before – but with that visibility has come tireless scrutiny from the media. The environment for trans people in the UK has become increasingly hostile. Anti-trans hate crimes are on the rise and suicide rates in the community are shockingly high.

The false dichotomy of feminists against trans people is ridiculous, because what it doesn’t see is how much trans people have always been a part of feminism

The oppression and violence trans people face is “terrifying”, Alabanza says. Some arms of the media are promoting “a fear that’s based out of no knowledge” – which Alabanza believes may be spurred on by political instability in the UK. People are looking for others to scapegoat and blame, and for many, trans people have become the target.

“The country is splitting with fear. Where can we take that fear? Because we’re not getting any answers from parliament about Brexit, we need to place our fear as a country somewhere. It happened in the 80s and 90s with gay men. It’s happened so many times. But what I think is really scary is that no one is seeing the contradictions in the narrative. The false dichotomy of feminists against trans people is ridiculous, because what it doesn’t see is how much trans people have always been a part of feminism.

Trans people’s rights are, for many people, “a fun Sunday evening debate”, Alabanza says. But lives are at stake.

“For kids, for vulnerable trans people, this is a matter of life and death. We have to realise the severity of the conversation and realise that for some it’s a conversation they can put down at the end of the day – and for others, they can never put this conversation down.”

The conversation around trans and gender non-conforming people needs to change – and the arts can play a powerful role in that shifting conversation. Alabanza hopes that audiences who see Burgerz come away with “a sense of urgency” about the need to act.

“We’re facing a rise of the far-right; we’re facing an epidemic of violence against trans people,” Alabanza says. “We have a choice to stay silent or to do something. I don’t make theatre for the sake of it – I make theatre because it’s the most successful form of activism that I found that I can do. A hundred people were on that bridge that day, and a hundred people are also in that theatre room. I want them to leave being better people. There’s a moment where we decide if we’re going to be the type of person who supports someone or doesn’t, and I hope what this show does is it teaches people to be better allies on the streets.”

While performing Burgerz at the Edinburgh Fringe festival, a 65-year-old woman approached Alabanza after the show one evening. Through tears, she told them that she had shared “horrible things” about trans people online – but said the show had made her want to write an apology.

“There are people that have never met a trans person, let alone listen to one for an hour. For me, that was just one story of many where I had lots and lots of people from a generation or a group that we paint as one thing come and get it and understand it. Maybe they didn’t understand every single definition, and maybe they will go away and not use my right pronoun, but what they really got was that they need to do better. For me, that still energises me to this day. It’s making me really excited to do this tour again, because there’s potential here for huge change.”