Jordan Peele: ‘Hearing an audience shudder with fear is a whole other level’

The Get Out director on his doppelganger horror Us, starring Lupita Nyong’o 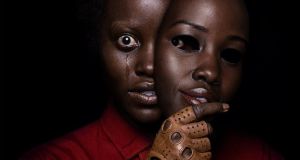 It’s a remarkable thing to find yourself sitting across from Jordan Peele, and not just because the Get Out director is a remarkable fellow.

At present, the writer, director and producer has so many projects in various stages of development – not to mention a 21-month-old son with his wife, Chelsea Peretti – that you have to wonder if Peele has added bilocation (or trilocation) to his already wide-ranging skills.

He voices Bunny in Toy Story 4 (opening this June) and will star alongside Robert Englund in the independent puppet horror Abruptio.

And then there’s the not-insignificant matter of The Twilight Zone. Peele has developed and will present the third reboot of Rod Serling’s 1959 anthology show, which will air from April 1st. He was, he says, initially “terrified” to take the job on.

“It’s a crazy thing to invite comparisons between yourself and Rod Serling,” says Peele.

“And the craziest part of The Twilight Zone is is attempting to please the real fans. I’m very humbled to make the attempt. We are working on good stories with great performances, but we’re still trying to service Serling’s vision.”

The Twilight Zone was a huge influence on Peele’s second film as writer-director. Us was initially inspired by the classic Zone episode Mirror Image, in which a woman encounters her duplicate at a bus station.

“I knew I wanted to make a doppelganger story,” says Peele. “And the Mirror Image episode from The Twilight Zone was a doppelganger story which has stayed with me since I was a kid. It was a very subtle, elegant episode that tiptoed into the story. It really sacred me.”

The unsettling idea of encountering a twin stranger has been explored by everyone from Dostoyevsky to Carl Jung. No one, however, has expanded the conceit quite as deliciously as Peele does with Us. The film concerns Adelaide Wilson, a little girl who experiences an unspoken trauma in 1986 and who grows up to be a nervy mom played by Lupita Nyong’o.

“One of the themes of this movie is the theme of generational trauma,” says the writer-director.

“I wouldn’t say victim, but my mother and her entire generation suffered during the Cold War with air raid drills and paranoia. That had an impact on pop culture. In the wake of that, there was a lot of green slime in the things I was watching as a child. Things like Teenage Mutant Ninja Turtles or Toxic Avenger.”

Adelaide is married to cheery, walking dad-joke Gabe (Winston Duke) and has two children, Zora (Shahadi Wright Joseph) and Jason (Evan Alex). If you’ve watched the trailer, it won’t be a spoiler to learn that Us concerns the appearance of the Wilsons’ exact doubles turning up in the family’s driveway.

These unwanted guests are dressed in identical red jumpsuits and each carries a pair of scissors – all the better to become “untethered” from their duplicates. This is just the start of the film’s rich mythology.

“I started with the idea what would it mean to have a family of doppelgangers,” explains Peele. “It’s not only that there’s four versions of a family. There would have to be a deeper connection because the mothers would have to give birth at the same time roughly have the kids that look the same. So I just followed down that rabbit hole and then tried to make sense out of a crazy idea.”

That “rabbit-hole” is both literal and metaphorical. Following on from Yorgos Lanthimos’s The Favourite – not to mention Fatal Attraction, Harvey, Donnie Darko and Monty Python And The Holy Grail – Us makes terrific and creepy use of bunnies, an animal Peele finds both cute and scary on account of their “scissor-like ears”.

“I love The Favourite but I think our rabbits are better,” nods Peele. “And we have more of them.”

Lupita didn’t leave that character much at all through the shoot. So when she came on set, she sucked all the air out of the room

Us, which quite rightly has a 100% Rotten Tomatoes score ahead of opening, has earned rave notices from, well, everyone: “. . . like something meant to be watched over and over until the tape wears down,” according to Emily Yoshida in New York Magazine; “Unnerving in tone and brazenly terrifying in story,” says Mara Reinstein in Us Weekly.

There has been particular praise heaped on Lupita Nyong’o’s dual (and sometimes duelling) performances. Even Jordan Peele was frightened.

“She didn’t leave that character much at all through the shoot,” he says.

“So when she came on set, she sucked all the air out of the room. When I had to give her notes, I had to go to a trailer and she’d be sitting there in character and I’d tiptoe in so nervously. It was quite . . . special.”

The floods of fanart and memes inspired by the film, even ahead of release, speak to an unmanufactured event movie. The “other” Wilsons look certain to provide next Halloween’s most popular costume.

The distorted version of 1990s hip-hop classic I Got 5 on It by Oakland hip-hop duo Luniz, as featured in the Us trailer, has generated a social media frenzy. Another key cultural reference is Hands Across America, the peak Reagan-era publicity stunt that saw 6.5 million people – including Barbra Streisand, Michael Jackson and C3PO actor Anthony Daniels – holding hands in a human chain across the United States in 1986.

“Well, wealth disparity was hitting record levels but as long as we look at the camera and smile, it’ll all be okay. It’s a dark, dark side to American optimism. There’s something about seeing this symbolic gesture as solidarity with the homeless or a way to cure hunger.”

Peele drops into an impressive Reagan impression: “Let’s put a teacher in a rocketship and see what happens.”

Reagan is not the only president in Peele’s repertoire. As one half of comedy duo Key & Peele, he calmly essayed a measured Barack Obama while Keegan-Michael Key played “Luther”, the former POTUS’s “anger translator”. Sample translation: “Good luck with your healthcare, assholes. I’m out.”

The act was so popular that Obama invited Key to perform alongside him as Luther at the White House Correspondents’ Dinner in 2015. The show was also a big break for Peele who, at 40, is something of a late-breaking sensation. The son of a single mother who grew up on Manhattan’s East Side, he dropped out of Sarah Lawrence College to form Key & Peele. The pair enjoyed some success on Mad TV between 2002 and 2009, before landing their own Comedy Central sketch series.

Does he miss comedy, I wonder?

“Not really, no. I loved doing it but I got enough laughs and I also failed to get enough laughs and I don’t mind leaving it behind. I can tell you that hearing an audience shudder with fear is a whole other level. I wouldn’t trade one shudder for a hundred laughs. It’s a newer sensation for me, but it makes me feel like I’m unlocking something important.”

That’s undeniable. There are many filmmakers who cite “Kubrick, Spielberg, Carpenter, Tarantino, Hitchcock; the fun ones” as influences, but few who can channel them simultaneously in the way that Peele does.

Us, like Get Out, deftly balances horror and comedy and social satire.

That happy marriage is part of the reason why Get Out made $255.4 million on a $4.5 million budget. It’s why commentators unpacked it as a key Trump-era text in what is supposed to be post-race America, while audiences hooted and embraced the term the “Sunken Place”, a phrase that has entered the lexicon, much to the chagrin of Kanye West.

“There are moments – only a few moments – where you have to name something and if you get the right name, you can kind of feel it,” says Peele. “I didn’t think that people were going to be using it – not in the least – but I felt it had the right ring.”

It was sort of a well-documented proposition. Would I make the Akira film? It was a good litmus test

When Us premiered at the SXSW festival earlier this month, there was a sense that critics were waiting to see what Jordan Peele had to say about America as much as they were waiting to check out his new movie.

The film does trade on ideas of xenophobia, otherness and, as Peele says, “how we point at outsiders but we can’t point our fingers at our self or accept our own responsibility for the problems of the world.”

Still, it’s daunting to be the movieverse’s brightest social commentator. “It’s a lot of pressure. I mean I might say some dumb stuff. It’s very cool and scary to have people expecting you to be smarter than you are.”

Post-Get Out, Hollywood has come a-courting for Jordan Peele. He has turned down superhero movies. He was offered BlacKkKlansman, but decided he would produce and Spike Lee should direct. The biggest curveball was Akira.

“It was sort of a well-documented proposition,” he says. “Would I make the Akira film? It was a good litmus test because if I couldn’t move forward with this – the most amazing property and the most amazing film – it confirmed my resolve to just write and direct my own work.”

Us is released on Friday, March 22nd