Never heard of Ariana Grande or Ryan Adams? Keep it to yourself

Why are people obsessed with sharing their ignorance? 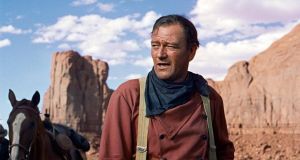 Following the “discovery” of information that had been available for nearly 50 years publications ran stories on the late actor’s illiberal attitudes. Photo/Warner Bros

Here is an unpopular opinion that may shock a few people: I never liked Wayne Bongdoodle’s films. Long before the Vice Squad flung him damply into the Black Maria, I was brilliantly and presciently not enjoying his early work. I don’t need to cancel him. He was never on the list.

You think that’s impressive? I can do better. I have never even heard of Tallulah Sideboard. When news broke of her racist outburst at the Frantic Monkey video awards, I was the first person to announce that I had no idea who she was. I’m great, me.

It’s hard to know which of these attitudes is the more annoying. The world is, obviously, full of people who genuinely never enjoyed Louis CK’s comedy or Kevin Spacey’s acting. But there was no need to broadcast the information quite so loudly when those celebrities got into trouble. Appreciating LA Confidential on release doesn’t make you a bad person. A 20-year hatred of Seven doesn’t qualify you for the Nobel Peace Prize.

It is, similarly, possible to have never knowingly heard Ryan Adams’s name before allegations of sexual abuse emerged earlier this month. You do not, however, win a seat among the elite by bellowing the fact from every virtual rooftop. This is not information worth sharing.

“I believe in white supremacy until the blacks are educated to a point of responsibility,” he told the interviewer

There was more of the former than the latter this week when shock news emerged that John Wayne believed pretty much what we all suspected he believed. You could scarcely imagine a more inexplicable storm in a more familiar teacup. Following the “discovery” of information that had been available for nearly 50 years – a 1971 interview with Playboy – publications such as the Guardian, the UK Independent, the Washington Post and – for all I know– Horse and Hound ran stories on the late actor’s illiberal attitudes.

Jesus fuck, John Wayne was a straight up piece of shit

To be fair, the conversation did veer towards the more unhinged end of the Wayne spectrum. “I believe in white supremacy until the blacks are educated to a point of responsibility,” he told the interviewer. “I don’t believe in giving authority and positions of leadership and judgment to irresponsible people.”

His views about the annihilation of native Americans were no less appalling. “There were great numbers of people who needed new land, and the Indians were selfishly trying to keep it for themselves,” he said.

The interview was quoted in a disgusted tweet by screenwriter Matt Williams (933 followers) and – much to his surprise, one imagines – quickly went super-viral. Having suffered predictable abuse from right-wing loons, Williams was, by the end of the week, reduced to frail, apologetic lower-case. “can i tweet again yet” he coughed.

Amid all the wild accusations there was, yet again, a great deal of chatter from brilliant people who had been performatively not liking John Wayne’s films since long before they were told that thing they shouldn’t need to have been told. “Never liked John Wayne or his movies anyway,” Ben says. Good for you. “Never liked John Wayne, never liked his movies,” Queen Gooner adds. Keep at it. “I never liked his films either and I do like (some) westerns,” Dan contributed. Santa will scratch you off the naughty list.

Think twice before boasting about detecting signs of malignity in the early work of recently revealed (or recently confirmed) bigots, abusers or philanderers

This is not a column about whether it is possible – or desirable – to enjoy good art by bad people. There are already enough such articles and it would require a tome the size of the Mexico City phone book to come to any satisfactory conclusion.

Nor is this a defence of John Wayne’s films. Though it is worth pointing out that Red River, the Searchers and Rio Bravo have remained securely in the critical canon despite long-pondered reservations about the talents’ politics. (Ward Bond, a frequent costar, made Wayne seem like Angela Davis). The Quiet Man, much at home to the indefensible manhandling of blameless women, has always occupied an awkward place in the nation’s collective psyche – it’s still more twinkly than a box of Lucky Charms – but it remains a staple of bank holiday television.

The argument here is more trivial. Think twice before boasting about detecting signs of malignity in the early work of recently revealed (or recently confirmed) bigots, abusers or philanderers. Think again before bragging about never having heard of these people. On reflection, that is the more enraging tendency. The persistent notion that ignorance of any subject – mathematics, pop music, video games, hurling – makes you a better person is one of humanity’s most regrettable low-grade flaws. Information is always power. Being unaware of Ariana Grande does not make you a better person (not that she’s done anything terrible). Bragging about that lack of awareness identifies you as a cask-strength drongo.

Oh, and I never liked Adolf Hitler’s watercolours. So there.