Pianist in the rubble: A Palestinian-Syrian refugee’s journey through music 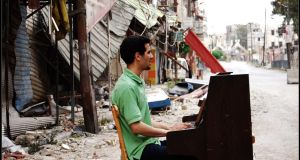 Aeham Ahmad broadcast from the streets of Damascus

For four years, Aeham Ahmad played a soundtrack to a devastating war. In the Palestinian refugee camp of Yarmouk, on the outskirts of Syrian capital Damascus, he wheeled out his piano to perform in the streets, often surrounded by children or neighbours looking for an escape from suffering and drudgery, during a long siege where many starved.

“I tried to make my piano a bridge to transfer [what was happening],” he says of videos filmed to show the world outside what Yarmouk’s sorry residents were going through.

Ahmad – who had never left Syria before 2011, when the war began – would address the camera, listing off problems, such as a lack of water or a plea for aid packages. Then, he would sit at his instrument – suddenly calm and concentrated, surrounded by rubble.

Ahmad thinks constantly of people he left in Yarmouk and Zaineb, a young girl murdered by a sniper, as she sang beside him

Videos of Ahmad were broadcast through social media, reaching people across the world. As Syria’s initially peaceful revolution turned into a protracted and bloody conflict, his videos were held up as proof of resilience, strength and the power of music in times of turmoil.

Ahmad is now a refugee in Europe. His new memoir, The Pianist of Yarmouk, reveals a principled man with a history more complicated than any footage could have conveyed.

When we meet this week, in a small seventh-floor room in Penguin’s London headquarters, close to the Thames, the slight 30 year old shows me his scars. He has one on his forehead and another on his hand, where a tendon was severed by shrapnel and sewn back together by a carpenter, who agreed to operate on him because the doctors had all fled.

Mentally, Ahmad is also scarred: he thinks constantly of people he left in Yarmouk, which the UN branded a “death camp” last year; and Zaineb, a young girl murdered by a sniper, as she sang beside him.

For Ahmed, creating the memoir was a kind of therapy. It took him four months to speak everything out loud

Ahmad’s piano was eventually burned by Isis. His family’s music shop, which housed thousands of instruments – 1,200 ouds, 600 guitars, and pianos – was bombed to pieces by Syrian regime forces.

In 2015, unable to carry on any longer, the pianist finally fled Syria, crossing Turkey and risking death on the Mediterranean, before arriving in Germany. His wife, two young sons, and parents have now joined him.

For Ahmad, creating the memoir was a kind of therapy. It took him four months to speak everything out loud, while working with writers who helped him hone detail that was at times almost physically painful to remember. “It was difficult and great,” he said.

In Syria, music – like sport – has become a tool of war

Ahmad’s finished book is a love story: to musicianship, but also to his dedicated father, a blind violin player, who pushed him to play music; to his mother, who sang sweetly every morning before the war began; to his wife and children; and to his community of Palestinian-Syrians, torn apart by an eight-year conflict.

In Syria, music – like sport – has become a tool of war. In late 2017, I visited the Damascus Opera House. A vast building, it’s located on the same roundabout as Syrian state media, close to the music school where Ahmad took lessons growing up.

I met some of the musicians still playing for Syrian state orchestras. They spoke of the challenges of staying, when so many others they grew up with are dead or have fled the country, but said there’s now a clear push to promote a nationalistic sense of identity through music.

Everything will be under the control of Assad. Every piece that you play. People would like to compose things not in the politics of the Syrian regime... they are not allowed to play it

By this, they clearly meant support for Syrian President Bashar al-Assad, whom the opera house is named after.

One notable example of music as propaganda happened in 2016, when the Syrian regime, with Russian help, reclaimed Palmyra from ISIS. Afterwards, a Russian orchestra was flown to perform among the ruins. For refugees following the war from abroad, this symbolised the ever-closer relationship between Russian president Vladimir Putin (who was beamed in to the concert live, from Sochi), and Assad.

For Ahmad, it was sinister. Even before the war, he says, music might not have been as political, but it wasn’t free.

When protests broke out in 2011, peaceful demonstrators composed revolution songs on the streets. The regime responded with brutality and the protests spread.

‘It was music that saved him’

Soon afterwards, Ahmad became a YouTube star. Initially, he was anxious about being recorded, and astonished when the videos began to go viral. Later, he realised that the internet gave him a kind of freedom, bridging the gap between his Palestinian camp in Syria, and Europeans, who took a growing interest in his actions.

In the end, it was music that saved him. With fame came offers of assistance. “I get a lot of help in Germany… Without this help I couldn’t go on with life.”

Like many other Syrian refugees, Ahmad knows if he goes back to Syria he could be detained and tortured in regime prisons. His brother Alaa is already missing in one; he was arrested at a military checkpoint near the start of the war.

'I fight against the image: refugee. What is a refugee? We are not refugees. We are names and not numbers.'

The Pianist of Yarmouk is also dedicated to Alaa and Syria’s other political prisoners, including another friend who was tortured to death. Ahmad speaks passionately of them and his frustration that Europeans don’t understand Assad is one of the biggest threats, even if street fighting stops again.

Ahmad speaks of the so-called Caesar photos, a cache which was smuggled out of the country in 2013 and shows the bodies of more than 28,000 people murdered in Syria’s prisons.

Growing rhetoric that Syria is safe because Assad is regaining territory is reckless and dangerous, Ahmad says. Pushing refugees to return means many more will die.

“I fight against the image: refugee. What is a refugee?” he asks. “We are not refugees. We are names and not numbers.”

Ahmad said he’s battling guilt, which can hit particularly hard when he’s on a stage, playing for European audiences, night after night. “I fight against myself because suddenly when you play every day a concert you feel you are a star, and I am not this one, and I don’t like to be this one,” he said.

'Music can make people forget what happened. Music can’t stop the war, but at least [it] can stop the war in the mind'

Now, Ahmad’s collaborating with Spanish and German musicians. After two years of anxiety, where he was unable to compose music, he was reunited with his parents. Now he can write again. “It’s coming really from my heart without any plan… I was lost for two years, but now it’s changed (since) my father and my mother [came] here.”

The pianist says he’s grateful music has given him a platform to speak on behalf of Palestinians and Syrians. “I am not tired of saying things again and again and again. I am tired, but I am responsible.”

He’s enjoyed bringing Syrian music to a wider audience, though admits his busy schedule shields him too, blocking bad memories and thoughts about the past. “Finding a new life is not easy… That’s why I play every day, to not think.”

“Music can make people forget what happened,” he reasserts, later. “Music can’t stop the war, but at least [it] can stop the war in the mind.”

When I see him perform later that day, it’s clear that Ahmad’s playing – like his writing and his speech – leap between energetic insistence and total despair.

On the evening of our interview, he plays a concert in west London’s St John’s Church, organised by Waterstones to promote his book. A modest crowd sits mesmerised at seeing the pianist of Yarmouk in person for the first time.

In the hours since I had interviewed Ahmad he learnt his brother’s friend had died. “Death is normal,” he says, but seemed shaken.

Wearing a crisp red shirt, he sweetly greets the audience, smiling and bowing before launching into a dexterous performance. The first song was called I forgot my name. Ahmad’s hands sweep up and down the grand piano’s keyboard, until he erupts in a wail that seemed to echo around the church, catapulting him back to the war he escaped from.

The Pianist of Yarmouk by Aeham Ahmad is published by Penguin