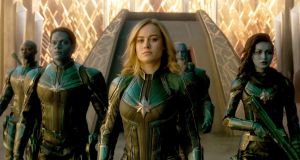 Brie Larson as Captain Marvel. Her call for more diversity in the media sparked a backlash among social media loudmouths. Photograph: Marvel Studios 2019

‘The internet? Is that thing still around?”

It’s been 20 years since Homer Simpson said those words, but, even then, we were expected to snort at his luddism. I’m here to tell you that movies can ignore the internet.

Okay that’s not correct. With the rise of streaming services, the internet – a word now synonymous with “all stuff, everywhere” – has absorbed the movie business into its very belly. Studios can, however, relax about one corner of the online universe. Yes, maniacs on social media cause distress for decent people with modest opinions. True, they generate think pieces in otherwise serious organs. But the lunatics have little effect on box office figures.

The man-baby panic over the latest episode in the Marvel Cinematic Universe confirms that – to adapt the BBC’s motto – Twitter (and the rest) shall allow fathead to speak paranoid gibberish unto fathead. Nobody else is paying attention.

It’s hardly worth detailing the supposed objections to the film. Dig around and you’ll find whinges about Carol Danvers, Captain Marvel’s alter ego, being introduced as an elderly Chinese man in issue 46 of the classic I, A Warrior! sequence in Bananaman. You know the sort of thing. The studio hasn’t done its “research”. The character is inconsistent with some comic published when Mark Zuckerberg’s dad was wearing nappies.

The real problem, however, was the creeping threat of radical feminism. Non-radical feminism is fine. That’s the sort that celebrates the fact that women have the same opportunities as men, are represented equally in the media, suffer no negative pay differentials and no longer have to struggle against misogyny in the work place. You know? The Narnia Wave of Feminism.

The decision to elevate a female character to title status was worrying enough in itself. Then Brie Larson, awarded the role following an Oscar win for Room, argued for wider representation of women and people of colour in the media. This was enough to confirm her as a “Social Justice Warrior” (henceforth SJW) who – because she said some stuff in a speech – was “forcing her views down our throat”. A small number of tiny-bearded men, broadcasting their views on YouTube while sitting before promotional toys for children’s films, demanded a “boycott” of Captain Marvel.

It is worth pondering the ongoing debasement of that fine word. When the citizens of Montgomery, Alabama, shunned the city’s buses to protest against racial segregation they could reasonably describe their actions as a boycott. Gandhi could say the same of his followers’ rejection of British goods.

This was not a boycott. Some people (not that many, as we shall see) were choosing not to attend a certain film. By this logic, I’ve been boycotting The Rose of Tralee for the last half-century. Where’s my Nobel Peace Prize?

The situation became more laughable still when James Woods, actor and right-wing blowhard, urged fans to see Alita Battle Angel instead. Robert Rodriguez’s terrible film concerns a scientist who finds a damaged teenage cyborg and, after increasing the size of her breasts, is smilingly informed that: “looks like she’s a little older than you thought”. An SJW might argue that the film was forcing outdated male gaze “down our throat”, but the #AlitaChallenge would not be halted. Right?

Almost nobody noticed. Captain Marvel took $455 million (€402m) in its opening weekend alone – way ahead of Alita’s takings for the previous four weeks – and installed itself as another behemoth in Walt Disney’s stable of box-office bruisers.

The Mouse House, which controls the Marvel menagerie along with the Star Wars empire, already knows not to take such scuffles too seriously. An equally silly online huff about SJWs ruining Star Wars: The Last Jedi could not stop that film amassing $1.3 billion. The signs go further back. A myth has developed that, 13 years ago, Snakes on a Plane confirmed the power of nascent social media (as it was then barely called) to drive box office sales. This is nonsense. A little-fancied exploitation flick gained meme status as punters laughed at the explicit title and exchanged gags about the amusing trailer. The film then opened modestly and limped its way to a tolerable $62 million. Snakes on a Plane stands as only the 91st most lucrative film of 2006. The meme assault had no apparent effect on ticket sales.

The happy moral (for once) is that humans aren’t so thick as we are sometimes portrayed. We pay little attention to loudmouths on social media and, when we do, we most often recognise them as loudmouths. Nothing about the Snakes on a Plane craze suggested the film was actually worth seeing. Everything about the #AlitaChallenge suggested its creators needed to get a bit more fresh air.

This will, of course, happen again. Expect to see this column again before the year is out.