The White Crow: Ralph Fiennes serves up Nureyev the nice 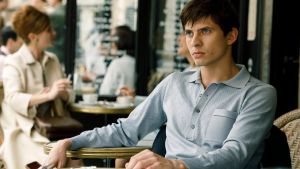 A young, hot-headed Rudolf Nureyev stares at The Raft of the Medusa by Théodore Géricault, picking out small, meaningful details. His swooning appreciation is matched by The White Crow’s appreciation of its subject, a metatextual case of Stendhal syndrome.

That’s not to say that director Ralph Fiennes’s account of Nureyev’s defection to the West is entirely hagiographic. Working from a screenplay by David Hare (The Hours, The Reader) and Julie Kavanagh’s 2017 biography, The White Crow recounts the confusion around his defection to the West in 1961, a snap, characteristically impetuous decision that had more to do with squabbling than politics.

This is a nicer, younger version of the dancer who, later in life, would threaten Dame Beryl Grey with a knife and who was described by choreographer Jerome Robbins as “an artist, an animal and a c**t”.

The ego that sees him storm out of the Le Bourget Airport in Paris and away from his minders is intrinsically linked to his remarkable talent. He’s as brilliant as he is difficult: stay tuned for the contempt he shows an unfortunate shopkeeper or a waiter he decides is looking down upon him. Even as a child born in a snowy and almost monochrome Soviet Union during the Great Patriotic War, he does not play well with others.

As a teenager, he takes an immediate dislike to his ballet master at the Vaganova Academy of Russian Ballet and insists on transferring to a class taught by Alexander Pushkin (Fiennes).

Thanks to terrific editing by Barney Pilling (The Grand Budapest Hotel, An Education), The White Crow jetées between Nureyev’s provincial childhood in Ufa, his education in Leningrad (where he lives with Pushkin and his wife), and his feted performances in Paris with the Kirov Ballet.

In France, he stays out all night with dull, wealthy society girlfriend Clara Saint (Blue Is the Warmest Color star Adele Exarchopoulos) despite the exasperation of his handler, revelling in adoration (“Everyone will know who I am!”) and art.

Lovers, including Pushkin’s wife (Chulpan Khamatova) and fellow dancer, Yuri Soloviev (Sergei Polunin) are never as important as his ambition.

Ukrainian soloist Oleg Ivenko, in his first acting role, is hardly a ringer for Nureyev, but he has the comportment, the eyelashes, the ferocity, and Mike Eley’s camera understandably loves him. Fiennes’s circumspect turn is matched by his considered direction.