Review: The Taoiseach takes a metabolic age test, but questions the science behind the result 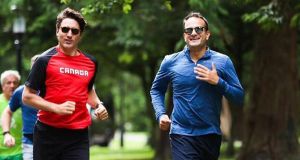 Transformation seems to come easy to Taoiseach Leo Varadkar. Once a vocal sceptic on civil partnerships, he later asked to be “an equal citizen in my own country” in advance of the marriage-equality referendum.

Once unabashedly anti-abortion, he last year came round to the idea that the Eighth Amendment harmed women. And the politician who once mused about deporting unemployed immigrants, having prisoners pay for their accommodation and that Tiny Tim – the Dickensian invalid – should “get a job” has sought to shed the ballast of such ungainly views to present a more streamlined figure, low on meat and early to the gym.

Cynics might argue that it’s a politician’s prerogative to be on the winning team, but in some ways Varadkar’s brief appearance on Operation Transformation (RTÉ One, Wednesday, 9.35pm) seem like another stage of his evolution. It’s certainly hard to think of another world leader prepared to step on a weighing scale, in his gym shorts, in full view of the public, with expectations of happy news.

It’s also hard to imagine any of them as transparently disappointed with the results.

Varadkar was one of a few famous faces to have their “metabolic age” assessed, an indicator of their efficiency in burning calories, generating energy and regularly emitting waste, which most politicians are good at. A metabolic age can be wholly out of sync with your actual age, though.

And last, but certainly not most, is Varadkar, the 40-year-old, meat-free, early-rising gym bunny. His metabolic age is 53.

“I’m surprised by that,” he says, in the same way that you might be surprised if Mícheál Ó Muircheartaigh kicked you squarely in the metabolism. Cheeringly, as a politician and a doctor, he immediately questions the validity of the test. “I’d have to see the science behind the breakdown,” he says, gamely, avoiding having one himself.

If Varadkar seems oddly at home though, it is because Operation Transformation is all about exposure. We come to know each contestant intimately, not just in an appreciation of their fluctuating weights, or the bare skin they display in weekly weigh-ins, but in witnessing their home lives, domestic friction and mental wellbeing through the process.

This candour is hardly comfortable, and the show addresses it. Two leaders, Cathal and Paul, are dealing with negative thoughts that appear to go deeper than body image, expressing thoughts both morbid and isolated that rattle their loved ones.

Sometimes, as any politician knows, a public platform elicits the most private thoughts.

If there is a theme to this week’s weigh-ins, it is failure and support. Just two leaders hit their weight loss targets amid mitigating circumstances and mild acts of self-sabotage. The show invites a physician’s level of invasiveness : Are your bowels moving okay?” one leader is asked, a question not put to Varadkar.

But it also stirs the kind of involvement that turns normal people into celebrities. Why wouldn’t a politician want some of that?

Even one with a surprisingly advanced metabolism.