Donald Clarke: The pejorative label has been reapplied to Dara Ó Briain. Idiotically 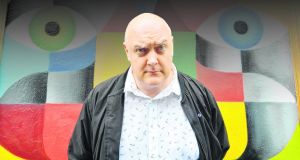 Dara Ó Briain: Despite being a fluent Irish speaker and GAA supporter has been called a ‘West Brit’. Photograph: Alan Betson

All kinds of things can get you called a West Brit these days. Voting Fine Gael. Being from Dublin. Being from south Dublin (if the supposed wit is from north Dublin). Being from Dublin 4 (if the abuser is from another even-numbered postcode). Supporting Manchester United. Saying “Boxing Day” (despite that being normal usage “among both communities” in Ulster). Preferring Heinz Ketchup to Chef. And so on… old chap, old bean. Ha ha! I’m hilarious.

Nothing so surely guarantees a volley of “West Brit” yells than complaints – such as this – about the continuing use of “West Brit”. Its users behave as if the term deserves protected status. Like so many other unattractive slurs, the words do indeed have a distinguished history. Daniel O’Connell used the phrase “West Briton” in a speech and that same version appears in James Joyce’s The Dead. O’Connell’s usage was not, however, meant pejoratively. Molly Ivors’s dig at Gabriel in the Joyce story came closer to the modern attack – increasingly common after the 19th-century Land Wars – on an Irish person who is just a little too fond of British manners and culture. During the 20th century the jibe was also much directed at gentlepersons in tweed whose crumbling roofs risked crushing the dogs they loved more than most people. That usage was often affectionate.

Ó Briain may have been caught ordering smoked haddock instead of a spice bag, and spotted wearing corduroys with brogues. Anything can generate 'West Brit' abuse

Somewhere over the last few years, as the definition has widened, “West Brit” has been wielded with ever-greater venom and zeal. It is particularly common in online discussions during the lead up to Remembrance Sunday. It goes without saying that anybody wearing a poppy is a West Brit. But the words also describe anybody arguing for equal tolerance of those who object to that symbol and those inclined to wear it. Get off the fence, West Brit!

Never mind November. It’s always West Brit Season for Irish celebrities working in the United Kingdom. Bag yourself a Graham Norton. Make it a brace by winging Dara Ó Briain as well. Despite being a fluent Irish speaker and keen supporter of Gaelic games, Ó Briain registers a few such complaints every year. He may have been caught ordering smoked haddock instead of a spice bag. He may have been spotted wearing corduroys with brogues. Almost anything can generate “West Brit” abuse.

Not a man to run blubbing to the lavatory when yobs sling cheap abuse (saying “lavatory” is almost certainly another trigger), Dara makes a habit of pointing out the semantic infelicities. The word “west” is right there. “By definition, I’m not West Brit, because I actually live in Britain. I mean, get your insults straight, please,” he responded to an Irish Twitter user who, at time of writing, has a bio page dedicated to veterans of an English football team. “Seriously, still calling people ‘West Brit’? And claiming you’re the one who has moved on? It’s a playground insult,” he replied to another correspondent.

I do not propose that Irish listeners of The Archers reclaim the phrase as African-Americans have their most abhorred ethnic slur. I'm not a total idiot

Dara is correct. The term is worthy only of the kindergarten or of those social media malcontents who regard “Brit” as a punchline in itself. Nobody should get carried away here. “West Brit” is not – as has occasionally been suggested – an abusive term to compare with those used against LGBT folk, religious minorities or people of colour. I do not propose that Irish listeners of The Archers reclaim the phrase as African-Americans have their most abhorred ethnic slur. I’m not a total idiot.

There is, nonetheless, something genuinely ugly about the “West Brit” slight and about the determination of enthusiasts to defend its continued use. It comes with a suggestion that there is only one approved way of being Irish and that any deviation from that norm is worthy of disrespect. To use the word is to engage in subsonic bigotry. It admits the wielder to an entry-level othering that brings the infantile joys of such intolerance without attracting the opprobrium that grander exclusions deserve. It’s like throwing stones at scarecrows rather than real people. Nobody gets seriously hurt, but the farmer will be less than happy.

Something else that always gets the slur fizzing is the reasonable suggestion that a mature nation should be past this class of indirect “Brit” bashing. It seemed that was happening. By the beginning of this century, as Ireland got that bit more cosmopolitan, it became less common to be labelled a “West Brit” for having the “wrong” accent or supporting the “wrong” sport.

It’s back. There is a fair bit of this stuff on social media. An Irish emigrant in the excellent video game Red Dead Redemption 2 even calls another arrival in the US a “snotty-nosed little West Briton”. (Dara can hardly argue with “west” here.)

That last example is an aberration, but the turnip-headed jibes at Ireland from Brexit-supporting English politicians and journalists have surely contributed to the unwelcome return of the West British slur elsewhere.

Oh, I know. I “doth protest too much”. I act in other ways to generate similar clichés concerning self-incrimination. I get that. I’ll run off and eat my soup now.